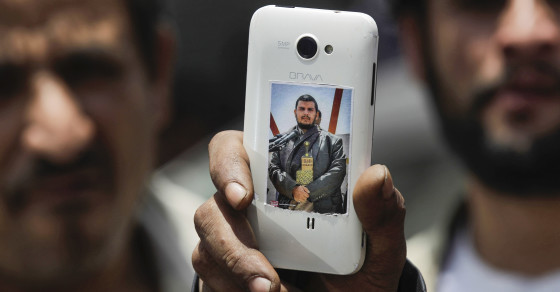 Houthi Rebels May Be Using WhatsApp To Spy On Resistance
By Joshua A. Krisch

Houthi Rebels May Be Using WhatsApp To Spy On Resistance

Houthi rebels in Yemen are using WhatsApp to spy on southern resistance soldiers, according Facebook posts and chatter on the ground identified by Vocativ analysts.

WhatsApp has been the mobile platform of choice for resistance fighters since at least 2013, when Vocativ reported that Syrian rebels had turned to Whatsapp to communicate under the oppressive Assad regime. In Yemen, the mobile messaging app is becoming a hugely valuable tool for the southern resistance. “It’s cheap, it works on all networks and it’s fast,” says Nazar Sraro, a volunteer paramedic for the anti-Houthi resistance.

But as the battle for Aden — a crucial Yemeni port — reaches fever pitch, the anti-Houthi resistance is warning its soldiers that some WhatsApp numbers may have been compromised.

Anti-Houthi leadership suspects that rebels killed several resistance fighters, seized their cell phones and began scrolling through confidential group chats. Members of the resistance are passing these suspicions around Facebook, calling on all soldiers to delete certain compromised numbers from their contacts, and generally remain vigilant on WhatsApp. “[The anti-Houthi soldiers are] very worried,” Sraro says. “they can’t do anything to avoid this risk, though.”

Translation: Important warning to all the brothers using the WhatsApp groups:

Those who have the numbers of the martyr Rashdi Mohammed Mohsan Alsabhi who worked with the minister of defense, his phone is in the hands of the Houthis. It was taken the day this soldier died, and it’s still open. They are using it to gather information on the southern resistance. You are requested to remove this number from the groups ASAP. Post and share this. The phone numbers are: 772100532, 700409311.

We ask Allah to give us victory, to the southern resistance.

Translation: Since there is a big danger today of kidnapping by armed militias, scanning their phones and reading their messages on WhatsApp, they must follow according to the following procedure to delete the messages:
Step one: Open the program.
Step two: Go to the settings.
Step three: Click on chat settings.
Step four: Click on “delete all discussions”.
Step five (most important): Because WhatsApp back ups every day automatically at 4 a.m., you must delete the copies stored in the phone using the following steps:
1) Go to file manager.
2)  In the memory of the phone find, in the folder WhatsApp, a file named “database”. This is where the automatic back-ups are. You have to delete it so that it won’t be recovered.

God save us from all evil and hatred.
Please post and circulate in order to ensure the safety of us all.