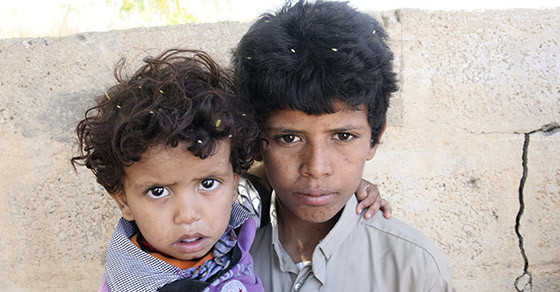 A U.S drone strike this week that killed two suspected Al Qaeda militants also led to the death of a sixth-grade boy whose brother and father were killed by drone strikes in 2011, according to Yemeni officials and a human rights group.

Mohammed Saleh Qayed Taeiman, who was reportedly killed in a drone strike this week, with his younger brother in 2013.

A tribal leader in Yemen told Reuters that Taeiman was a militant for Al Qaeda in the Arabian Peninsula, but according to the Yemeni National Organization for Drone Victims (NODV), he was “a normal kid.” The human rights group said his father and 16-year-old brother were killed in a 2011 drone strike, and his other brother was wounded in a separate drone attack.

Friends and family members of drone victims in Yemem started NODV in 2014. It calls for the Yemeni government to investigate the U.S. attacks, and seeks to offer psychological aid to survivors of drone strikes, as well as their friends and family members. Approximately 400 people have been killed by drone strikes in Yemen alone, according to 2014 numbers from the Bureau of Investigative Journalism, an independent nonprofit organization.