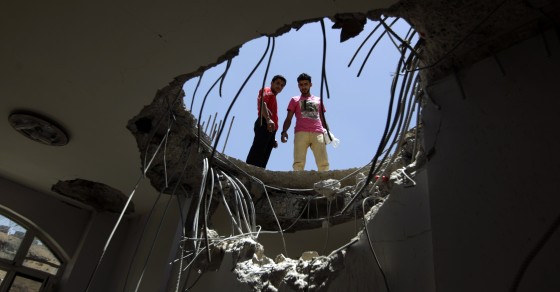 Tape your windows. Find the safest room in the house and stay there during the bombing. Residents in Sana’a, Yemen’s war-torn capital, have been posting online guidelines to surviving air strikes and other bombings as the fighting between pro-government forces and Houthi rebels enters another destructive week.

People living half a mile from a military depot felt the impact of a Saudi-led airstrike on Monday which obliterated stores of missiles to prevent them falling into rebel hands. In the aftermath, people posted photos of their destroyed houses and later, tips on how to protect themselves from future raids. They suggested finding a room in the center of their house that didn’t have windows and was easy to be able to get out of in case they needed to evacuate.

The fighting in Yemen has gone on for almost a month. However, on Tuesday afternoon—only hours after Iran had said it was hopeful a cease-fire would be declared soon—Saudi Arabia and its coalition partners announced an end to their current operation in the country, although it hasn’t ruled out continued military action.

Translation: “Use tape on all the windows to protect yourself in case they break.”

With further air raids and fighting in #Yemen some more advice on how to cope and how to stay safe via @Safer_Yemen: pic.twitter.com/53Rx1Gnz1v

“The doors of the safe room should be as strong as possible and covered from the inside with a heavy blanket to protect you from shrapnel.”