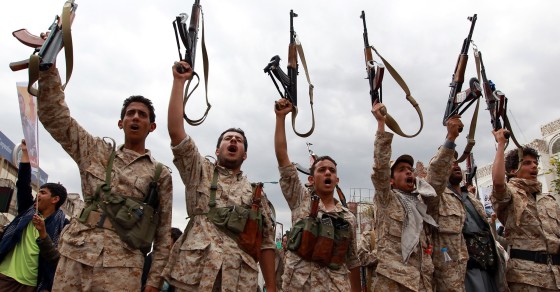 Iranian-backed, Shiite Houthi rebels in Yemen are increasingly turning to crowdfunding campaigns on Twitter and Facebook to buy weapons, as airstrikes by Saudi Arabia have destroyed their aircraft, ballistic missiles and command centers.

The rebels’ Shiite supporters are sharing account numbers at the Yemeni CAC international bank and Yemeni YBRD bank to help raise money for the cause, a Vocativ analysis shows. As the Saudi-led bombing campaign against the rebels enters its fourth day, Houthi and pro-Houthi groups also are using social media to ask supporters across the region for financial support.

More Everything You Need To Know About The War In Yemen

Over the last 24 hours, Vocativ discovered, the crowdfunding campaigns got picked up by major pro-Houthi Facebook groups, generating hundreds of shares, comments and requests to donate by people both in Yemen and beyond Yemen’s borders, including countries with large Shiite communities, like Iran and Iraq.

Saudi and pro-Saudi social media users have already launched their counterattack on Twitter and Facebook, trolling the Houthi posts, replying with memes and photos that insult the Houthi rebels and praise the Saudi-led coalition. A summit of Arab leaders also agreed on Sunday to continue the Saudi-led airstrikes in Yemen until the Shiite rebels there withdraw and surrender.

The first message was published by the Houthis official Facebook account on March 24, asking people to donate money to fight the so-called Shiite revolution.

Translation: “Bank accounts of the “civilian effort” to help the battle fronts.”

Translation: “The Supreme Revolutionary Committee opened a bank account (1005093727) in the CAC intentional bank. It will be used as to facilitate the people’s financial efforts. The Leader of the Revolution, Mr. Abdulmalik al-Huthi, called the people of all the classes and opinions to fill the camps with fighters, to help the media to expose the criminal, and to donate money.”

Translation: “We are from Iraq, how can we contact you? (in response to the funding ad).”