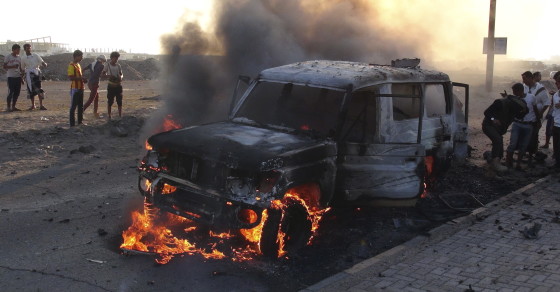 Everything You Need To Know About The War In Yemen The Saudi bombing campaign in Yemen, now into its second day, has scored significant approval across the kingdom, a social media analysis by Vocativ shows. A broad swath of the country, from news anchors to celebrities to average citizens, is online showing support for the campaign, and by extension for a proxy war of Arab states against Iran. Egyptians, whose naval forces are mobilizing for the Arab coalition, have similarly shown loyalty with posts praying for victory and Arab glory.

But what does this mean for the region? How long will Yemenis have to endure this kind of tumult? What’s the endgame here, and what does it mean for people around the world? The burning questions about the conflict, answered below.

What does the Saudi public think of the war in Yemen?

So far, the response has been overwhelmingly positive. Videos showing Saudi troops carrying the flag and taking part in the Operation named Decisive Storm are being posted online. Iran has also been the target of widespread insults, as have the Houthi rebels in Yemen that Iran has been supporting financially and militarily. Vocativ analysis showed the majority of tweets commenting on #decisivestorm have come out of Saudi Arabia, with Egypt and the third partner in the coalition, United Arab Emirates, following.

Translation: Iran is like a shepherd that leads the sheep into a valley of wolves and leaves them to their fate, while fleeing for its life.

Translation: No dialogue with the militias in Yemen! That allows them a moment to breathe. Our goal is to push the Houthis back.

Translation: We’ve decided to take matters into our own hands. With the help of Allah, this is the beginning of a broader Arab cooperation.

Why is Yemen so important?

Yemen is the poorest country in the Arab world, so at first glance it might not appear significant enough a prize for a proxy war. But its port of Aden is a critical shipping lane for tankers and oil shipments coming into the Suez Canal, supplying Eritrea and Sudan as well as Egypt and Saudi Arabia. It also shares its longest border with Saudi Arabia, which has for years sought to either subdue rebellion, prop up flailing leaders or take over parts of the country to augment its own security interests. It has inserted itself in Yemen’s internal politics, bribed tribal leaders and, every now and then, used military force to maintain stability.

Why should Americans care about another proxy war in Yemen?

For years Yemen has been the scene of U.S. intelligence operations to root out Al Qaeda in the Arabian Peninsula (AQAP). U.S. officials consider AQAP the most dangerous offshoot of the main group. AQAP has demonstrated an ability to manufacture sophisticated weapons and dispatch members to carry out international operations—it claimed responsibility for the recent Charlie Hebdo massacre in Paris—and it continues to hold foreigners hostage. Now it is poised to move in and take advantage of the chaos unfolding in the battle between the rebels and the government forces. The Obama administration’s response to the rapidly deteriorating situation has been confused, with White House officials reluctant to admit the failure of what it had once hailed as a model for its Middle East policy.

Who should Americans support? Saudi Arabia, Egypt and the UAE, or Iran?

There is not going to be a victory here, at least not for the U.S. Saudi Arabia has been Washington’s strongest Arab ally, providing enough stability in the world oil market to allow the U.S. to turn a blind eye to Riyadh’s human rights abuses. And while the U.S. has been frustrated with Saudi’s role in funding and equipping extremist groups responsible for attacks in Iraq and Syria, it doesn’t want to see the monarchy replaced by an even more radical power. On the other hand, the Obama administration is keen to strike a nuclear accord with Iran, to push back Tehran’s timetable to create nuclear weapons, and allow it to reenter the international community to some extent. Moreover, whether Washington is willing to admit it or not, the U.S. needs Iran’s help to fight ISIS in Iraq.

What happens if Iran wins?

If Iran-backed Houthi rebels gain the upper hand, the victory may be short-lived. Saudi Arabia will not tolerate a Shiite power on its border and will likely continue to support militias to unseat any prospective Shiite leadership, much in the same way it has been propping up the Sunni insurgency in Iraq. The Saudis, in this bombing campaign, have reportedly hit targets believed to be Iranian-controlled ports used to store weapons and ammunition. It will continue to hinder Iranian gains in Yemen for the foreseeable future.