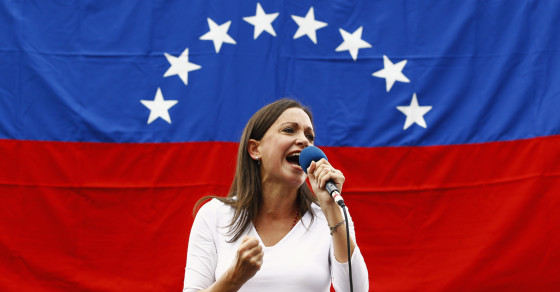 The Rise of Venezuela’s Top Rebel Leader
By Mac Margolis 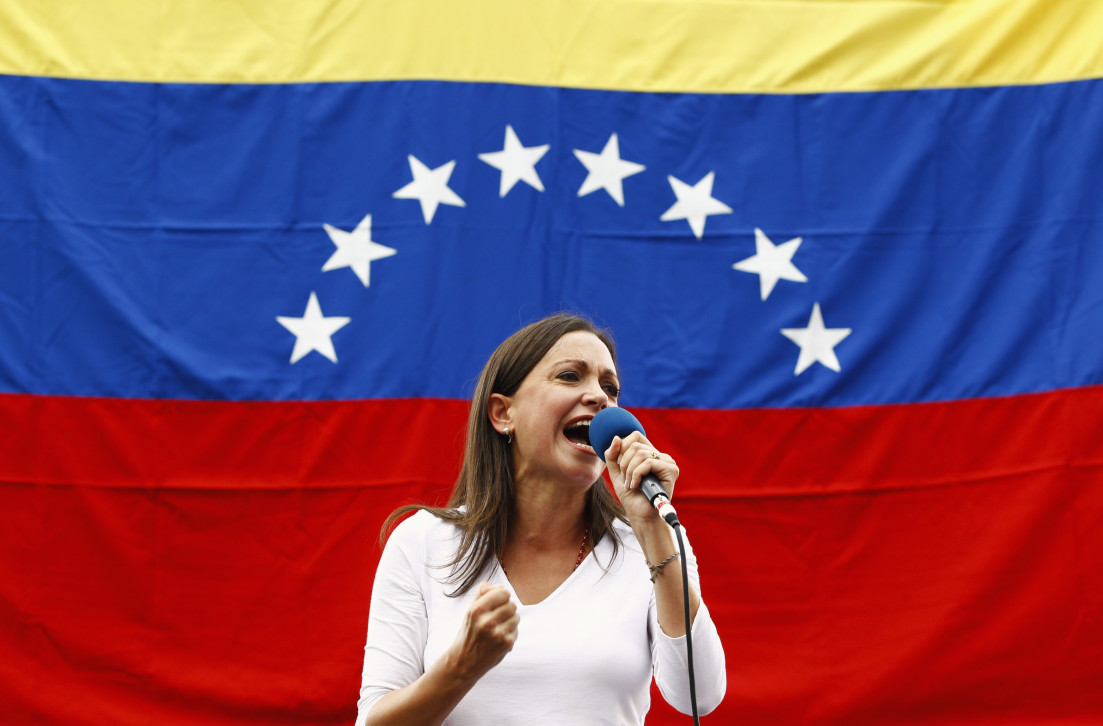 Maria Corina Machado doesn’t look like a counterrevolutionary. Slender and stylish, impeccably painted and coiffed, she could pass for an art dealer or a globe-trotting fashionista. Anything but what the 46-year-old former engineer truly is: Venezuela’s most in-your-face political leader.

Machado’s critics delight in casting her as a Latin Material Girl, enamored of Botox and selfies. “Mattel’s original model for Barbie,” said one Venezuelan blogger. But her foes dismiss her as a political lightweight at their own risk.

No one has come to represent the rolling protests that have swept through Venezuela since early February more than this slightly built mother of three, a bona fide “Mantuano,” as members of Venezuela’s fair-skinned elite are called. In the last year alone, Machado has campaigned against the late Hugo Chavez’s so-called Bolivarian revolution at the polls, gone toe-to-toe with ruling Socialist party legislators and led massive street demonstrations from the Andes to the barrios of Caracas. And when Chavez’s anointed successor, Nicolas Maduro, tried to quell the unrest with deadly violence, she took her opposition message on the road, speaking with policy makers, lobbying diplomats and working the press in Washington, D.C., Panama City and Lima, Peru.

“We are seeing repression like we have never seen even in the worst days of the military dictatorships,” she said last week at the Center for Strategic and International Studies in Washington, D.C., bringing a roomful of scholars and policy wonks to their feet.

Mention her name among rank-and-file Chavistas, however, and you will hear another reaction. “The little bourgeoise-ette,” “traitor to the homeland” and “fascist ringleader” are a few of the preferred memes of the Bolivarian phrasemakers.

Some Maduro loyalists went even further. When Machado spoke out against the government at the National Assembly last May, Maduro’s heavies decked her and broke her nose.

Last week, Maduro’s envoys struck again, rallying regional allies to bar her from speaking about the savage government repression of Venezuelan protesters at the March 21 Organization of American States, the highest body of Latin American diplomacy, in Washington, D.C. Doubling down, the president of the National Assembly, a Bolivarian hardliner named Diosdado Cabello, then announced he was stripping her of her seat in Congress for allegedly violating the constitution.

That’s a lot of ordnance for an adversary the Palacio Miraflores once waved off as little more than a gadfly. Indeed, when university students marched against a wave of street crime in the Andean city of San Cristobal on Feb. 11, Machado, an independent legislator with no party affiliation, was hardly the face of the opposition.

The anti-government voice of record had been Henrique Capriles Radonski, the conciliatory governor of Miranda state, who came within a razor’s edge of besting Chavez’s handpicked successor in the April 2013 elections. (By contrast, Machado polled 5% of the national vote.) But when the Bolivarian national guard and armed militias began attacking protesters—leaving 34 dead and injuring thousands of others—Capriles toned down the rhetoric, hoping to keep unarmed demonstrators from harm’s way.

Leopoldo Lopez, a 42-year-old former mayor of Chacao and Machado’s close ally, stepped in and galvanized protesters with his militant energy. He exhorted protesters to stay in the streets as the only way to dislodge what he saw as a corrupt and bankrupt government. But on Feb. 19, Lopez was arrested for inciting violence and “terrorism,” among other dubious charges, and is now locked up in a maximum security military jail.

FROM ENGINEER TO OPPOSITION LEADER

Machado’s rise to the front lines of the democratic rebellion has become one of the key conversion narratives of Venezuelan politics. Born into one of Venezuela’s most prominent families, she grew up in the middle-class district of Candelaria, in Caracas. Machado followed her father’s footsteps into engineering and worked her way up from the bottom at the family-owned steel mill, SIVENSA, which was later expropriated by Chavez without compensation to her family.

As a rising executive, she had no patience for politics and little time for civic affairs—until the day her mother walked her through a shelter for abandoned children in Caracas. Pregnant with her second child, she doubled over from the stench of open sewage. Machado quit her job and plunged into community service to aid the poor. It was a short hop to politics.

This was in the early 2000s, when Hugo Chavez was consolidating his power.  Machado watched in dismay as the self-styled “Comandante” turned the country upside down. “Something clicked,” she told the Washington Post in 2001. “I had this unsettling feeling that I could not stay at home and watch the country get polarized and collapse.”

Machado has been called a "traitor" and a "fascist ringleader" by members of Venezuela's Socialist party.
(Reuters/Carlos Garcia Rawlins)

She launched the civic group, Súmate, in 2002 to help Venezuelans voters exercise their rights. In a country where the Comandante wrote the electoral rules, she soon found herself in the political fray and helped organize the 2004 presidential recall vote. The voter drive failed to remove Chavez, but it earned Machado a reputation as a rising star in the political opposition. In 2010, she launched her own campaign for Venezuela’s unicameral National Assembly, winning more votes than any other legislator.

Machado has had a rocky three-year tenure. Thanks to constant gerrymandering under Chavez, the National Assembly is stacked with governing party supporters, who will go to extremes to make their point. The Socialist party thugs who fractured Machado’s nose last year also left 17 other lawmakers injured in the same congressional session. The images of that melee, especially Machado’s bruised and disfigured face, generated headlines across the world.

Machado after suffering a broken nose at the hands of government heavies during a congressional session last May.
(ZumaPress.com/GDA/El Comercio)

Now the mayhem has moved to the Venezuelan streets, where protesters with sticks and Molotov cocktails face off against National Guardsmen armed with automatic weapons. Determined to spread the word on the government’s strong-arm tactics, Machado went to Washington, D.C., in late March. “Venezuela has awakened,” she told policy makers. “We are going to fight until we win democracy.”

A frequent visitor to the U.S. capital since the George W. Bush administration, Machado knows her way around the White House and Capitol Hill, where she has friends on both sides of the aisle. “She is eloquent, speaks excellent English and contrary to the official propaganda, is anything but a radical,” says Eric Farnsworth, a former State Department aide under Bill Clinton.

She’s also adept at diplomatic cat-and-mouse. When Maduro’s envoys maneuvered to deny her the microphone at the OAS on March 21, Machado turned to Panama, an outspoken critic of the Bolivarian regime. Conservative President Ricardo Martinelli quickly invited Machado to join the Panamanian delegation at the summit.

So Maduro struck again, rallying friendly nations around Latin America—17 of which happen to benefit from cut-rate Venezuelan oil—to close down the proceedings to the public. Thwarted within the summit, Machado held her own press conference inside the OAS headquarters. “Venezuela has dramatically altered the democratic order,” Machado said. “Today the world recognizes the Venezuelan regime as a dictatorship.”

Machado on her opposition movement: "There are millions of us in the streets, and we will stay there until we achieve democracy."
(EPA/Migel Gutierrez)

That sent the Bolivarian commissars back home into a fury. The Chavista-controlled Assembly demanded a criminal investigation into Machado for crimes including treason relating to her involvement in anti-government protests. A lesser public figure might have caved in. Machado struck back. “Those who think they will intimidate me are wrong,” she told reporters before returning to Caracas. “I am a Venezuelan representative elected by the people.”

Though it’s hobbled by inflation, scarcity of food and gathering violence, the Chavista government may not be near collapse. Maduro still has the backing of the military and the support of millions of Venezuelans who fear his fall may lead to even more disarray.

But by standing up to Maduro’s crisis-ridden government, Machado has helped show that Chavismo is not the only game in town. “There are millions of us in the streets, and we will stay there until we achieve democracy,” she told policy makers and the press last week. A day later, she was back in Caracas, on the march again.