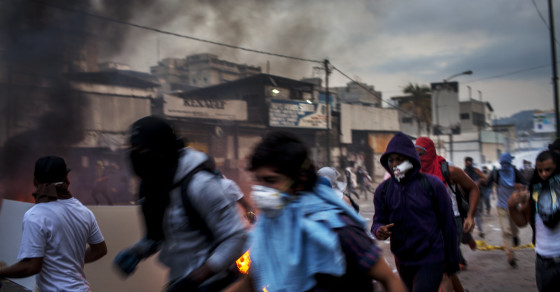 Anatomy of a Venezuelan Student Protest
By Natalie Keyssar

Anatomy of a Venezuelan Student Protest 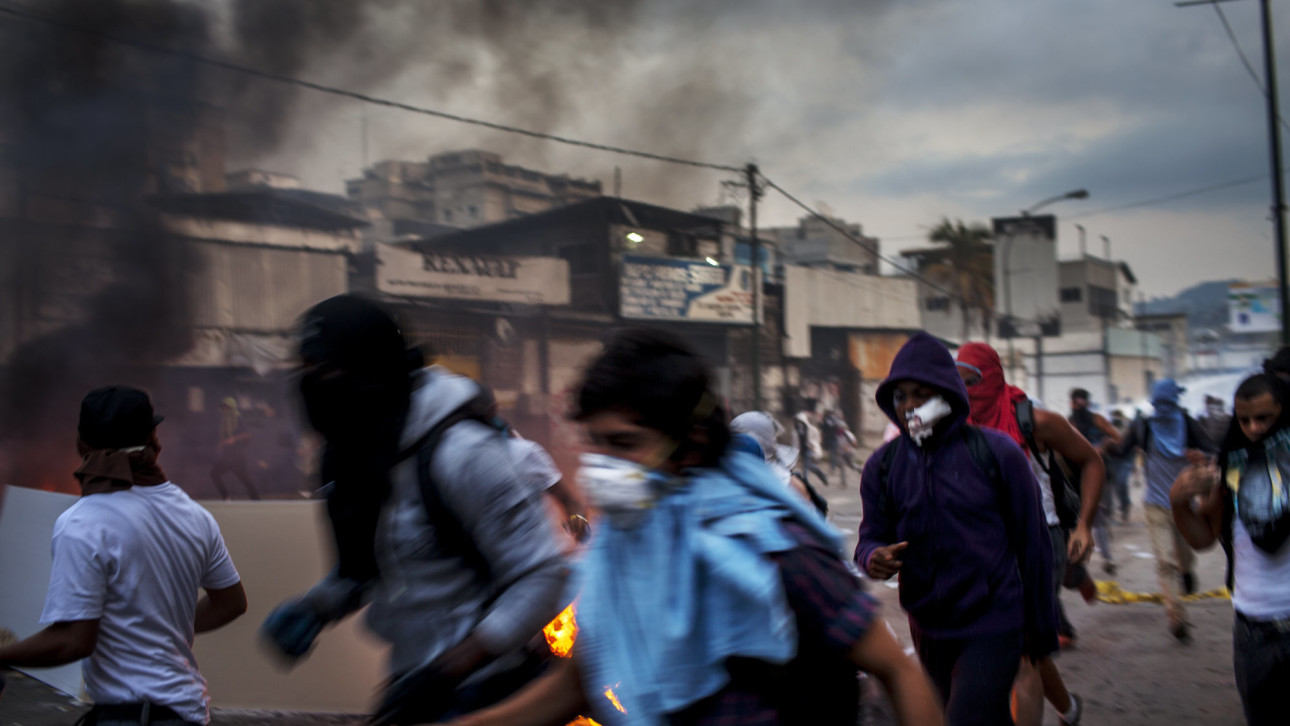 Around 10 a.m. on March 12, Venezuelan students streamed into a blocked street in Bello Monte, Caracas, one month after protests began.

They had originally planned to meet at nearby Plaza Venezuela, and then march to the government public defender’s office. Their goal was to demand protection and justice for fellow protesters who have been detained, murdered or tortured in the ongoing unrest, which has claimed lives of opposition members, government supporters and law enforcement.

But when they got to the plaza, government troops prevented entry. The students quickly regrouped nearby with speakers perched on scaffolding as vendors sold water and flavored ice to the hot but animated crowd.

A vendor sells oranges to student protesters beneath a Maduro billboard.
(Vocativ/Natalie Keyssar)

During an hour of speeches, student leaders called out the names of their dead and detained. They also reiterated their calls for more safety in the streets, as well as an end to skyrocketing inflation and shortages of basic goods, from milk to toilet paper. Then they began to march, adjusting their route on the fly to avoid police and pro-government demonstrators.

Students cheer in Bello Monte at the rally.
(Vocativ/Natalie Keyssar)

Reports of the pro-government student rallies nearby were that they were smaller than the opposition’s numbers, and peaceful, with Chavista students calling for dialogue with the opposition and an end to the unrest in the streets.

Thousands of students march through the Central University of Venezuela campus.
(Vocativ/Natalie Keyssar)

The opposition march passed through the Central University of Venezuela’s tree-lined campus, a historic seat of student activism in Venezuela. The streams of youth appeared nervous, energized and determined as they approached the exit gates of the university, until they saw it was blocked by national police in riot gear flanked by two water canons, which the protesters have nicknamed “the whales.”

“Here we go,” said a protester, pulling her bandana over her face.

National police await the students, barring their exit from the campus for the unsanctioned protest.
(Vocativ/Natalie Keyssar)

Student leaders rushed to the front of the procession as a heated debate broke out over how to handle the blockade, revealing a fundamental split between student activists who insist on peaceful demonstrations, and those with a “by any means necessary” attitude. The students surged toward the row of riot shields. Some called them murderers and brainwashed puppets. Others attempted debate.

Two students pose for a phone photo with the line of police as they await a decision on whether they will be allowed to continue their protest.
(Vocativ/Natalie Keyssar)

“Brothers, we are the people and so are you,” said one young man to the wall of helmets. “Our problems are yours. Our fight is your fight.” They were met with clenched jaws and uncomfortable stares, shifting under the wait of their armor under the heat of the day, and visibly tensed for the obviously brewing clash.

Stray dogs wander past the police lines before the clashes.
(Vocativ/Natalie Keyssar)

As the wall of students became more agitated, a student leader grabbed a megaphone to call for patience. “We have asked the police to peacefully permit us to pass. They are requesting five minutes to decide on this. Please be patient. We would like to do this as peacefully as possible. This is a peaceful movement.”

Protesters rush the police lines when they are not permitted to pass, and are met with pepper spray and water canons.
(Vocativ/Natalie Keyssar)

After impatiently waiting for half an hour, everything finally boiled over. A surge of students pressed forward, some taking flying leaps, karate-style, at the police. The police responded immediately with pepper spray and water canons. Within seconds, the air was full of water, gas, flying rocks and bottles. Professors passing by and curious onlookers, scurried for cover. A stray dog ran, panicked, between the protesters’ legs. Members of the pacifist factions of the students left in frustration.

As the students press forward, they are met with water canons and gas.
(Vocativ/Natalie Keyssar)

Police and protesters traded blows for three hours, with police reinforcements arriving at one point. They launched canister after canister of tear gas.

From an archway, the protesters are seen amid a rain of gas.
(Vocativ/Natalie Keyssar)

Plumes of the blue smoke wafted eerily through the lush gardens of the campus. A water spigot shot up from the lawn, and students desperate for relief from the gas stuck their faces into the fountain, which likely exacerbated the effects.

An open spigot creates a rainbow in the afternoon light as tear gas wafts through the air.
(Vocativ/Natalie Keyssar)

A wooded hillside on the campus caught fire amid the chaos, and when the firemen arrived, they were driven back by tear gas. A few protesters used the buckets of water they generally prepare for drowning canisters to attempt to extinguish the blaze. A few hundred feet back from the front line with police, hundreds of students looked on and attempted to recover from burning eyes and lungs.

A student overcome by gas lays on the ground.
(Vocativ/Natalie Keyssar)

Some lay on the ground, faces pressed into the grass, breathing the cleaner air through the earth itself. Student sources reported four injuries from canisters and bird shot, none serious. Volunteer doctors and medical students sprinted through the chaos in scrubs and gas masks.

Protesters overcome by the gas shelters behind a mural.
(Vocativ/Natalie Keyssar)

Little by little, the crowd of students dispersed. The police line remained resolute. Finally, around 5 p.m., the last of the masked protesters called it a day. Retreating back through the campus, many headed for Altamira, for yet another evening’s clash with the National Guard there.

As night fell, the tear gas cannon’s booms rang out over the wealthy neighborhood of Altamira once again, marking a month of turmoil. Reports came in from Valencia and Tachira of more deaths in the past two days, bringing the official protest related death toll up to 25.

A protester poses in the broken windows of a looted office building in Altamira.
(Vocativ/Natalie Keyssar)

Even as the protests, barricades and shortages continue all over the country, few question that President Maduro maintains strong support among his base of poor Venezuelans who are deeply loyal to him and his predecessor. For now, there seems to be little chance for meaningful dialogue between the two sides, creating an impasse that leaves much of the country feeling uncertain of what the near future will bring, or how to solve the underlying issues.