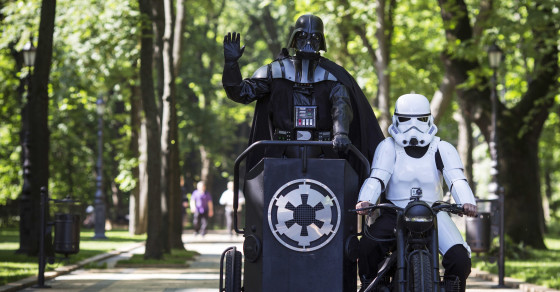 Here’s Why Ukrainians Should Vote for Darth Vader 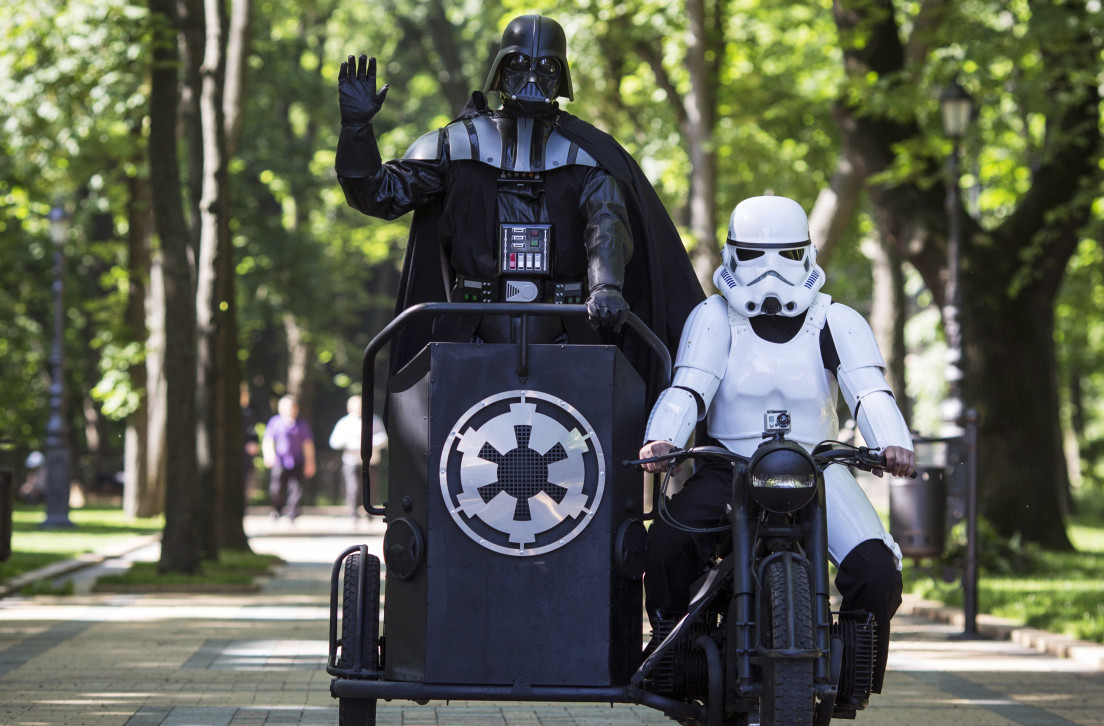 As you may have heard, Darth Vader is running for office in Ukraine.

Darth Alekseyevich Vader was on the ballot for the Ukrainian parliament during Sunday’s elections, appearing as a candidate for the Internet Party of Ukraine, AP reports. His colorful campaign consisted of “landing” in different local regions in full Sith Lord regalia. He speaks about his platform between taking those infamous pronounced breaths through the slit in his mask. A man named Stepan Chewbacca Mikhalovich is also running as an Internet Party candidate.

News outlets have gotten word of Darth’s latest antics (he also ran for mayor of Kiev back in May and tried to run for president of Ukraine in March). Few, however, have noted the legitimate politics behind the mask.

Ukrainian Darth Vader, previously known as Viktor Shevchenko, wants Ukrainian politicians replaced by a computer system that he believes would limit corruption and enhance government transparency. “When I get to parliament,” Vader told the AP, “I will expel all the deputies. They have proven their uselessness. …Computers will work in their place, and they will fulfill their functions without cease.”

There is a general flavor of absurdity there, but there’s also some political substance to Darth’s ideas. Darth’s Internet Party of Ukraine is fighting for an “e-government,” which is pretty much exactly what it sounds like—a huge computer system that will unite the “government,” “business” and “citizens.” For this system to work, there need to be “greater transparency and monitoring of government activities,” says the Internet Party’s website.

Impractical as an “e-government” might be, the goals behind the idea are more than a mere publicity stunt. Remember the Ukrainian government, though its political parties are experiencing an overhaul, is still very much ruled by oligarchs. Even though there is some hope that Sunday’s election results will see a win of about 20 seats for the anti-corruption youngsters who want a more Western-style government, the parliament will probably still be overrun with corrupt deputies. “As ever in Ukraine, nothing is what is seems,” The Economist reports. “The new parliament is likely to be dominated by old faces wearing new masks.”

In a country where corruption often seems to be the norm, the idea of impartial governance is pretty important.

Darth dramatically removed his mask in a gesture symbolizing the fight against corruption in an ad posted to YouTube Oct. 7. “I hope my public act will be considered the start of a social-political flashmob,” he wrote on his party’s official website. “‘The removal of deputies’ masks,’ a relay race for all lawmakers. ‘The people of Ukraine should be able to see whom they elect with their own eyes.'”

And Darth isn’t just looking to rid the country of corruption. He’s also running on a strong platform of reclaiming Ukraine from the pro-Russian rebels in the east. He wants the Crimean Peninsula back as well, which Russia annexed back in March. He’ll build “a military space station that will protect the whole territory of Ukraine,” he told AP. That’s somewhat less likely than a computer that would run the government, but still, an interesting vision.

A page from Kiev weekly, "Vesti," with the head shots of Ukrainian presidential candidates. Darth Vader is smack dab in the middle. Dated March 31, 2014.

Taking back eastern Ukraine from the Russians is a pretty controversial goal in Ukraine, which might be why Vader told AP his character unites all sides of the conflict. He visited 13 Ukrainian regions, he said, and received a warm welcome in each. “On this day, there isn’t any politician, not one, who would be able to go to the east and be welcomed there, and could go to the west, and be welcomed there also,” he said in a Business Insider video interview. “You have to understand that I unite the whole of Ukraine, because I am a Ukrainian.”

And with a distinctly Ukrainian politician comes a distinctly Ukrainian social media campaign. Darth’s convictions might be serious, but his marketing strategy appeals to the bizarreness in every voter. Take this musical ad for example, where the Internet Party takes a Soviet pro-Lenin chant from 1983 and transforms it into a pro-Internet Party chant, adding Chewbacca to the mix. The original chant goes, “Lenin! Party! Komsomol!” The Internet Party chant says, “Vader! Party! Internet!”

Vader posts ads like this one to his Facebook page, which has more than 20,000 followers, and his VKontakte (Russia’s Facebook) page. Here are some more golden ads posted to his VKontakte page:

Translation: “All these gadgets: the Internet, computerization, freedom of speech—they’re merely cover-ups for our manic aspiration towards absolute power.”

Many people posted photos to Darth’s Facebook and VKontakte groups Sunday with their alleged voting ballots, Vader third on the list of candidates. They emphasized their right to vote for whomever they choose, with a check mark next to Vader’s name.

A user named Anton Dyachenko posts to VK a thumbs up next to his vote for Darth Vader on the Ukrainian ballot. There were dozens of similar photos on Darth's VK page.

Unfortunately, our beloved Darth wasn’t given the right to vote Sunday because he refused to take his mask off at the polls. He pissed off a “babushka,” or an elderly woman, who was supervising the polling station. RT has the ridiculous footage, which also shows how much of a press darling Darth has become:

It’s pretty unlikely the Internet Party will see political success in the near future. But for now, Darth Alekseyevich Vader is pretty much the best example ever of Ukraine appropriating Western imagery in a way that is half about a political conviction and half incredible nonsense.