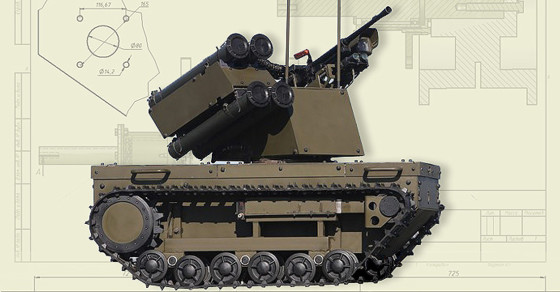 Volunteers Crowdfund A Robotank For Ukraine’s Army
By Vocativ Staff

Ukrainians have released a video of a new crowdfunded tank that they hope to equip with missile launchers and/or machine guns.

The small prototype was created together by a local volunteer movement called “the People’s Project” which is fundraising to buy weaponry and necessary items for the military through a dedicated crowdfunding website.

So far, The “First People’s Tank” project has raised over 195,000 hryvnia (approximately $8,000) out of the target 270,000 hryvnia. Although the tank doesn’t have any weaponry yet (and looks rather flimsy), the finished version will apparenty include remote-controlled missile launchers and machine guns. The Ukrainian version seems to be a response to Russia’s new Project-M robotic tank, from which the People’s Project lifted their main graphic.

The “People’s Project” is attempting to raise funds for everything from medical procedures for wounded soldiers to lumber to heavy weaponry, including drones and remote-controlled machine guns. Hundreds of thousands of dollars have already poured in from donors around the world.