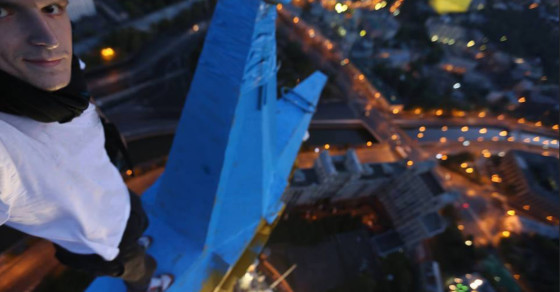 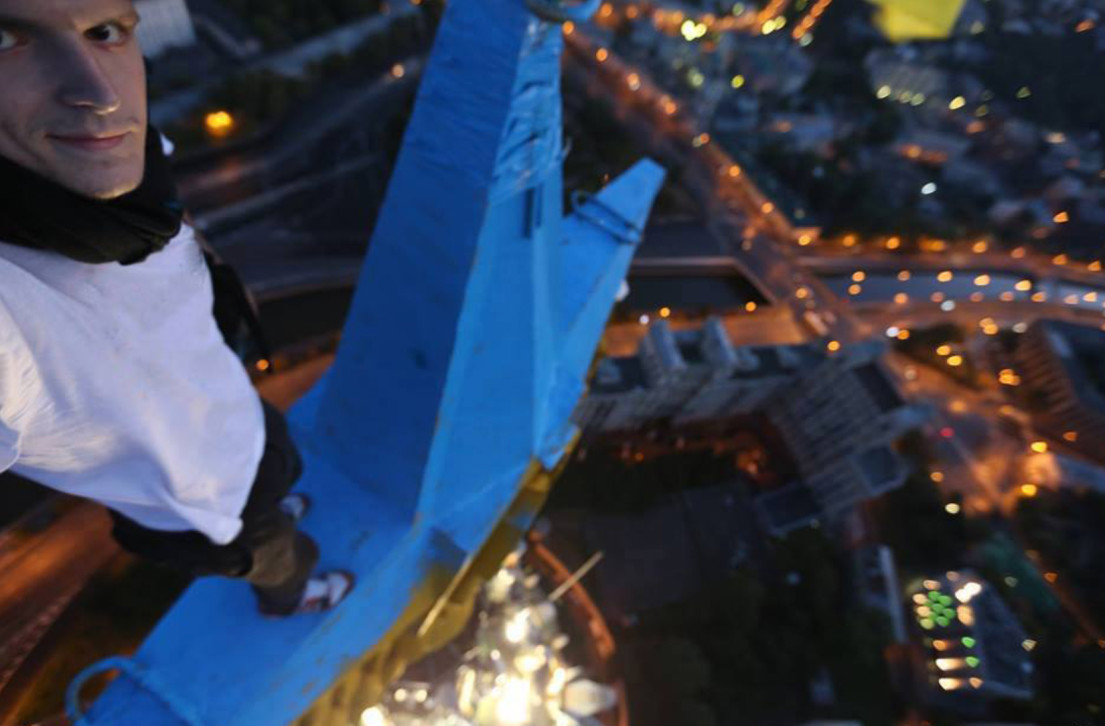 A Ukrainian extreme climber confessed on Facebook to planting a Ukrainian flag on the Kotelnicheskaya Embankment building in Moscow and painting over the tower’s Soviet star with Ukraine’s national colors. The thrill seeker, who calls himself “Mustang Wanted,” posted a (pretty impressive) selfie on top of the building, writing in the caption that the stunt took him all night.

Four roofers, whom Mustang Wanted said he doesn’t even know, were accused of the desecration and put on house arrest, facing up to seven years in jail. Mustang wrote that those roofers are innocent, just as they claim. The roofers were at the scene at the time of the painting, but say they were there to perform an unrelated stunt. Two of Mustang’s assistants, however, were also subsequently arrested.

The Kiev-based athlete wrote on Facebook that he sold video footage of his climbing the building for $5,000 to Life.ru, a Russian tabloid news outlet, and then donated the money to the Ukrainian army, releasing pictures Life.ru claims were part of the exclusive package via his own Facebook page. The Ukrainian army has been strongly relying on funds and services from volunteers such as Mustang.

The Ukrainian Spider-Man said he felt an “outburst of genuine patriotic feelings,” which compelled him to pull off the stunt. The painted flag was reportedly up for three hours before it was removed.

President Petro Poroshenko of Ukraine congratulated those responsible for the action and put it in the context of Ukraine’s Independence Day, which was on Sunday. “I really liked that on the eve of the Ukrainian flag day, they repainted a high-rise in Moscow in our colors,” he said.

Mustang openly admitted to the act of “hooliganism,” the charge that the four roofers are now facing. “I consider my action an art performance and dedicate it to the Independence Day of Ukraine, as well as all the guys who defend my homeland now!” he wrote.

Having caught the attention of Russian authorities puts him in the same position as the likes of Pussy Riot. If captured, Ukrainian Spider-Man might face some serious hooliganism charges from the Russian government.

Regardless of threats, he’s still going strong. Mustang posted the photo below of himself on Sunday at the top of Moscow State University with the caption reading, “Happy Independence Day, Ukraine!”