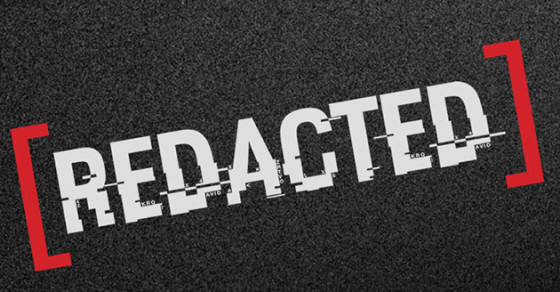 If you’re wandering the streets of London, you might see sketchy-looking signs for RT (formerly Russia Today) emblazoned with stickers saying “redacted.” The WikiLeaks-esque ad campaign for Russia’s state-funded news outlet is an evolution of their previous campaign in cities in the U.S. The only difference is that RT reports it is being censored by several outdoor billboard vendors in London. Something is fishy in the world of RT’s journalism—again.

The original RT ads feature ominous sketches of George W. Bush, Tony Blair, Colin Powell and other familiar Western faces involved in the war on terror. They are plastered with phrases like, “This is what happens when there is no second opinion. Iraq war: No WMDs, 141,802 civilian deaths.” The purpose of the ads, RT says, is to paint the publication as an important voice in the news for people who want multiple perspectives. And according to them, London does not approve of their particular brand of trailblazing journalism.

The pro-Kremlin news source claimed that several London billboard advertising businesses refused to display the ads’ original images in telephone booths and tube stations, allegedly forcing RT to redo the campaign so that each ad featured a splashy “redacted” sign over the portraits of the politicians. “Several platforms were not comfortable with what they deemed to be political overtones of the ads, and for us to proceed on the postings we would have to entirely change the visual of the campaign, which is why we replaced them with the redacted posters,” said RT’s head of communications, Anna Belkina.

What Belkina wouldn’t say is who was behind the supposed censorship. In an article about the redactions Thursday, RT said the London billboard companies cited the Communications Act of 2003 in their refusal to show the ads, which supposedly prohibits political advertising. One problem, though. The Communications Act of 2003 doesn’t actually deal with billboards—it legislates broadcast media like television and radio.

The Advertising Standards Authority of UK, the organization in charge of self-regulating ads in England, said it had not received any complaints about RT’s campaign. “We haven’t, therefore, had ground to consider an investigation let alone take any action against Russia Today’s ad,” wrote Matt Wilson, ASA’s Communications and Marketing Manager, in an email to Vocativ. It is most likely the media owners of the billboard sites who took issue with them, he added. Russia Today declined to name the multiple billboard vendors that they said censored the ads.

This is how the posters appeared on the streets of Manhattan.

It’s all just a little fishy.

Whatever the truth is, the Kremlin mouthpiece is definitely pushing hard to make noise. It conveniently launched a website called “RT: For the Second Opinion” that goes into detail about the circumstances of the censorship, alongside an augmented reality app which allows Londoners view the “original”, unmolested posters—all of which seems a bit too seamless in the short period after the supposed rejection. The website makes a huge deal of London outdoor billboard companies “rejecting” them:

“In September 2014 RT’s international ‘Second Opinion’ ad campaign was all set to roll out in London, having made its U.S. debut a month prior. …And then…RT ads were REJECTED for outdoor displays by many London platforms and authorities because of their ‘political overtones.’ They had to be REDACTED for all outdoor formats, save for wild postings.”

According to this dedicated microsite, RT’s Second Opinion ad campaign sets out to make viewers think about what happens when “nobody questions the evidence” and when “those in power are allowed to tell their story unchecked by the news media.”

The campaign failed to grab nearly anyone’s attention when it was posted all over New York City in August, and RT could totally have decided to reinvigorate a limp ad campaign with a fake censorship controversy.