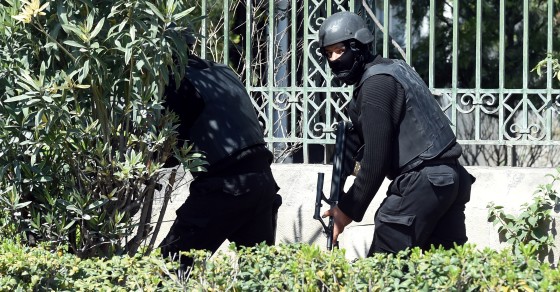 Tourists Killed In Museum Shooting In Tunisia
By Gilad Shiloach

19 people, including 17 tourists from several European countries, were killed in a shooting at the Bardo National Museum In Tunisia on Wednesday. Men dressed in military-style clothing seized hostages in the museum in an apparent attack against the Tunisian Parliament, according to reports from the Radio Mosaique radio station.

Tunisian security forces surrounded two of the militants holed up inside the museum, which shares grounds with the country’s parliament. Both the museum and parliament were evacuated shortly after 10am EST. The deceased included nationals from France, Spain, England and Italy and one from Tunisia, with 24 others injured in the shooting, according to government statements. At a press conference later in the day, Tunisian Prime Minister Habib Essid said that as many as three men connected to the shooters may be still on the loose.

ISIS supporters immediately took to gloating about the attack via social media, despite no official claim of responsibility for the attack being made by any group.

A photo of the Hostages inside #Bardo museum in #Tunisia #تونس @alwasatnewsly pic.twitter.com/XWc9g72d0G

Updated at 11.30EST to reflect a confirmed death toll.