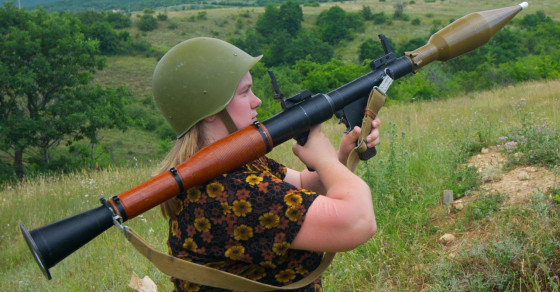 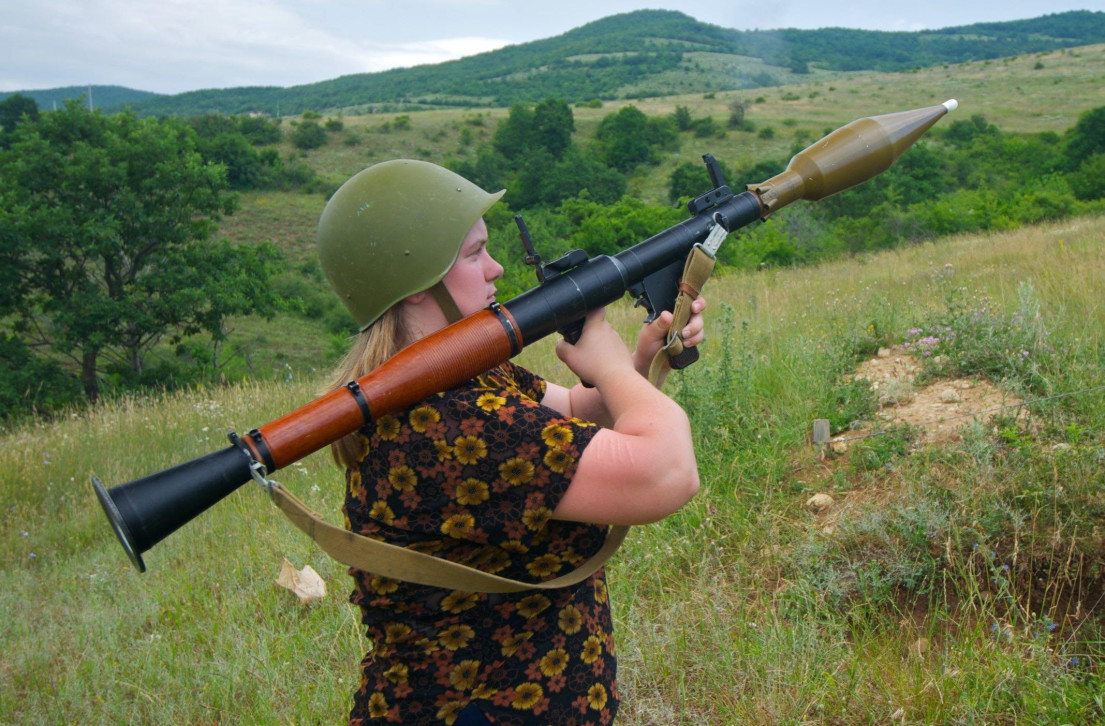 .
During the past week in eastern Ukraine, pro-Russian forces, capitalizing on the momentum fueled by Russia’s recent annexation of Crimea, have seized police headquarters in Luhansk, vandalized a TV building in Kharkiv and taken over government buildings in Donetsk, declaring the city a People’s Republic after several days of violent clashes with Ukrainian civilians and police. The flare-ups are the most recent in the ongoing battle over Ukraine’s national identity.

Earlier this week, U.S. Secretary of State John Kerry accused “Russian special forces and agents” of being “the catalyst behind the chaos,” rather than actual pro-Russian Ukrainian citizens. On Friday, Russian Foreign Minister Sergei Lavrov denied this claim and said there are no military or special service agents in southeastern Ukraine. But Ukrainian government officials claim they’ve captured an alleged Russian agent of chaos.

The spy in question is 22-year-old Maria Kaleda, who arrived in Ukraine on April 4 and was detained four days later by the state’s Security Service (the successor to the country’s branch of the Soviet-era KGB). The SBU claimed Kaleda had confessed to shooting Ukrainians in Mykolaiv, organized pro-Russian protests in Kherson and gathered intelligence about Ukrainian forces on the border with Russia. Kaleda also admitted it was her ninth trip to Ukraine over an unspecified period. At the time of her arrest, the SBU confiscated a pistol and ammunition from Kaleda “as well as guidelines for the training of subversive groups.”

The SBU did not respond to requests for comment, but if Kaleda is a spy, she’s not a very good one. Her (sometimes extreme) nationalist leanings are on vivid display on her social media accounts, namely Instagram and Vkontakte, Russia’s version of Facebook.

Perhaps ironically, there’s a picture of EU-themed doughnuts—hashtagged in Kiev while Kaleda was allegedly in another city—a kind of edible propaganda, given that the crisis in Ukraine began when ousted President Viktor Yanukoych failed to sign an agreement with the European Union.

Other Instagrams from Kaleda show burnt-out husks of cars and buildings following the recent protests in Kiev.

The above photo shows an arsenal used by the Berkut, the now-disbanded Ukrainian riot police that used violent force against Euromaidan protesters. Pro-Russian separatists often align themselves with the Berkut, and Kaleda does the same here, reminding people via the caption that Euromaidan activists technically beat the Berkut (since they “won” and installed a pro-Western government in Kiev), and that she’s #antimaidan. This is a specifically Russian narrative, in which Russian forces are humanitarians, saving beleaguered Ukrainians like the Berkut from thuggish, fascist protesters. Kaleda doesn’t mention the hundreds of protesters killed, kidnapped and tortured or still missing.

On the above “no war” picture, Kaleda asks her 1,294 Instagram followers to explain why the emblem of Ukraine is turned sideways. “A coat of arms is a coat of arms, and it does not turn over. This is a mockery of a symbol,” she responded to one user who said the emblem is actually a peace dove holding a truce sprig.

On April 7, one day before her arrest, Kaleda posted from Mykolaiv, a city in southern Ukraine where 15 people were injured and 23 were detained in clashes: “#Mykolaiv #Ukraine #Antimaidan chanting ‘Berkut’ and ‘Us, Russia!'” The SBU alleges Kaleda participated in Mykolaiv’s nighttime riots, using firearms and wounding three people.

There are multiple pictures where she blames the chaos and damage of the past months on Maidan protesters.

Upon her arrival in Ukraine on April 4, Kaleda, writing on Instagram, said she made “new friends,” referring to two mascot-like figures in an apparent attempt to fool anyone looking at her account, as she was allegedly in Kherson that day but hashtagged the above picture from Kiev. She also posted to her Vkontakte account, which lets us know her relationship status is “complicated,” that she’s currently studying criminal law, and that she received four medals in high school from the Communist Party.

Some of her listed interests include “politics,” “extreme journalism,” “boxing” and “knife fighting,” while her favorite quotes are tips on war and power from the likes of Nietzsche, Bismarck and Hitler. That would seem to be in line with previously posted pictures from 2012 that show her training in hand-to-hand combat in the snow-covered woods with Dmitry Dyomushkin, the leader of the Slavic Union, a banned ultranationalist group in Russia. Dyomushkin was convicted of extremism by a Moscow judge a few weeks ago, but wasn’t sentenced to jail or fined. The Slavic Union believes that Russians, Belarusians and Ukrainians should be united under the banner of shared Russian ethnicity.

On March 25, Kaleda shared a post written by Dmitry Zakharov, titled “Appeal to Putin about the protection of Russian-speaking population of Ukraine.”

“Our compatriots need protection [from] the junta which seized power in Kiev…[it’s] “time for Russia to protect Russians in Ukraine, using all means, including the use of the army for peacekeeping missions.”

A profile photo from July 2011 shows Kaleda in a floral shirt and helmet, hoisting a rocket launcher. She also once posted a picture of Russia’s Emergency Services Ministry and called it her alma mater. Other images show her softer side:

In between Kaleda’s bouts of animal cuddling and combat training, the SBU believe she was “finding out the status of armament of officers of the State Border Service of Ukraine on Crimea’s border with mainland Ukraine” and investigating whether people bypass checkpoints and enter Crimea.

Her last VK post came on the morning of April 8, after Ukrainian authorities dispersed pro-Russian protesters in Mykolaiv. “Mykolaiv! Don’t despair! All is still in front of us for life goes on!” she wrote with #Antimaidan. Soon after, she was arrested by state authorities.

While Kaleda awaits word on her fate, acting Interior Minister Arsen Avakov hopes to resolve the current standoff in eastern Ukraine in the next 24 hours, either by talks or force. In the meantime, Interim President Oleksandr Turchynov has offered amnesty to those who surrender their weapons and end the occupation of government buildings.