Russia’s U.N. ambassador stuns LGBT protesters, telling them “We are for nondiscrimination”
By Versha Sharma

Russia’s U.N. ambassador stuns LGBT protesters, telling them “We are for nondiscrimination”

A dozen members of the international gay rights group All Out gathered on a corner of New York City’s Park Avenue in the rain Thursday afternoon to deliver a message to Russia: Repeal your anti-gay laws and maybe we’ll stop harassing you.

The move came just 24 hours after 50-plus All Out members delivered a petition signed by 322,000 people to the International Olympic Committee’s headquarters in Switzerland, urging the IOC to speak out against the anti-gay propaganda laws President Putin signed this summer. The 2014 Winter Olympics will be held in Sochi, Russia, in February, and Wednesday’s event marked the first time the IOC has ever met with a gay rights group.

We wanted to check out the scene and even caught a glimpse of a prolonged argument between All Out Executive Director Andre Banks and Russian Ambassador to the United Nations Vitaly Churkin. 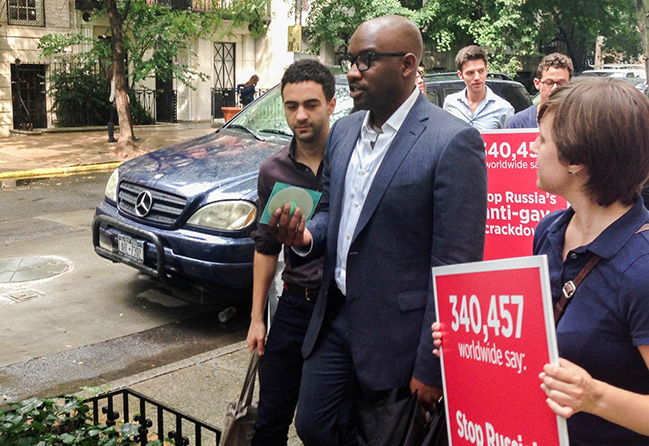 Banks and fellow All Out co-founder Jeremy Heimans walk with senior campaign manager Sara Perle to the residence of the Russian Foreign Minister. Banks is holding a CD with more than 340,000 names on it urging Russia to repeal a new law that makes it illegal to talk to minors about homosexuality. Russian Foreign Minister Sergey Lavrov is in New York City to meet with Secretary General of the United Nations Ban ki-Moon. “We’re excited the Secretary General’s here because he’s been a such a great advocate and ally, and we’d really like to hear him speak out against these particular laws, which he has not done,” said Banks. 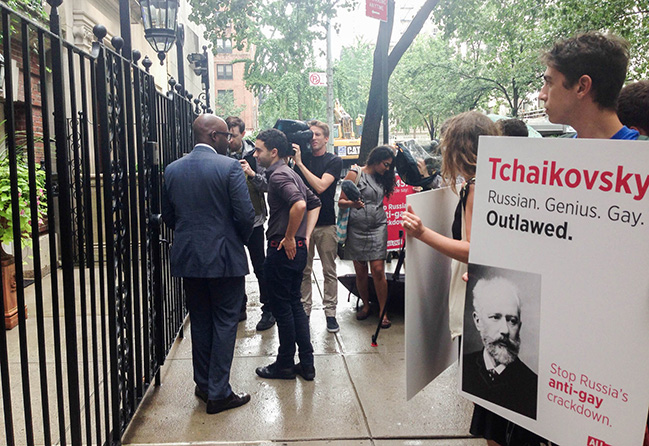 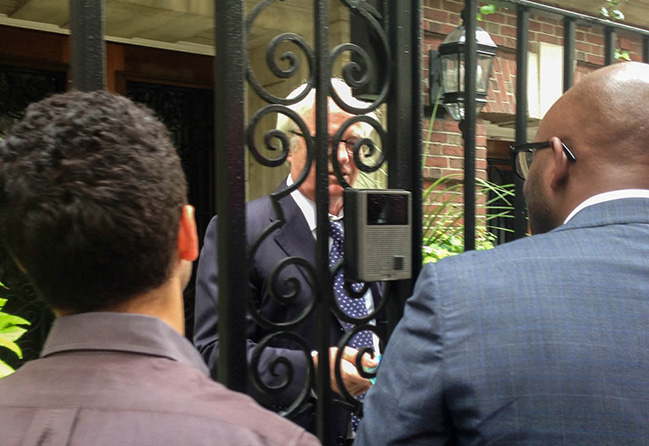 When it appeared that the residence turned off the bell, Banks slid the CD petition under the gate. Soon, Russian Ambassador to the United Nations Vitaly Churkin entered the gate, picked up the CD and handed it back to Banks with a request that he deliver it “properly” to the mission at the United Nations. Banks then argued with Churkin about gay rights in Russia. 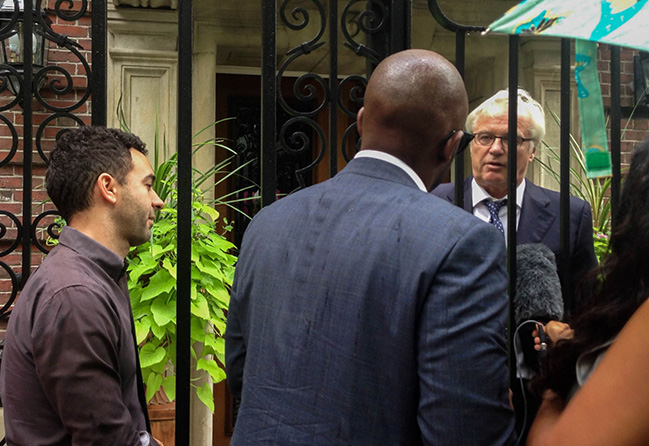 Banks asked if Russia was going to fine gold medalists who wear rainbow flag pins. Churkin responded, “You need to talk to the Olympic Committee.” Banks then retorted that they had spoken to the IOC, citing yesterday’s meeting as evidence that the committee is “really feeling the pressure on this issue.” Churkin noted that America hasn’t exactly been great about civil rights either, citing the black power salute by American athletes at the Olympic Games in Mexico City in 1968. 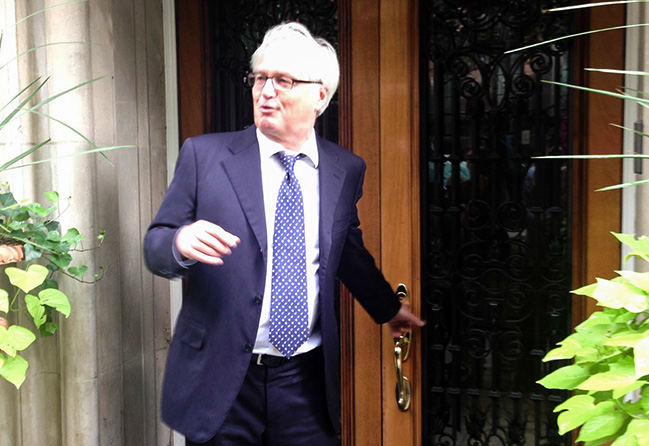 Churkin walked away from the gate when Banks mentioned that Madonna had recently been fined 500,000 rubles (about $17,000) for violating the propaganda law with her comments at a St. Petersburg concert. When I mentioned four Dutch tourists had already been arrested under the same law, he said, “I’m not an expert on this. You need to talk to experts. The law says some things about what can be done about people…the law is exclusively about homosexual propaganda and minors. So if there are some people who are trying to violate that, trying to tell us how to teach our kids, well then I suppose some measures…will be punishable in Russia under Russian law.” He also told the gathered group to pay attention “to what you’re teaching your children in your own country.” 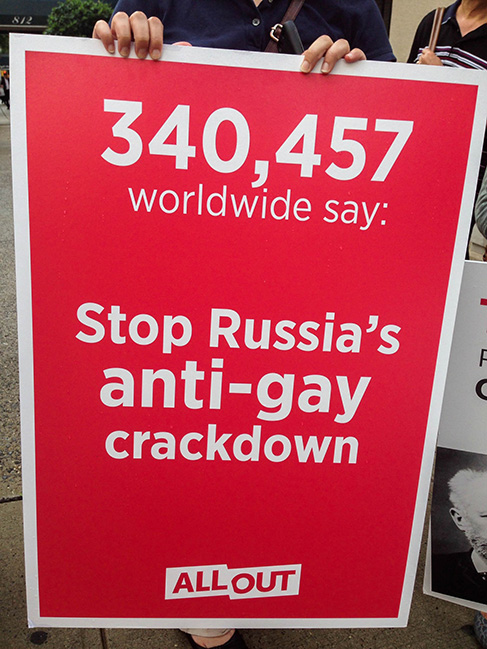 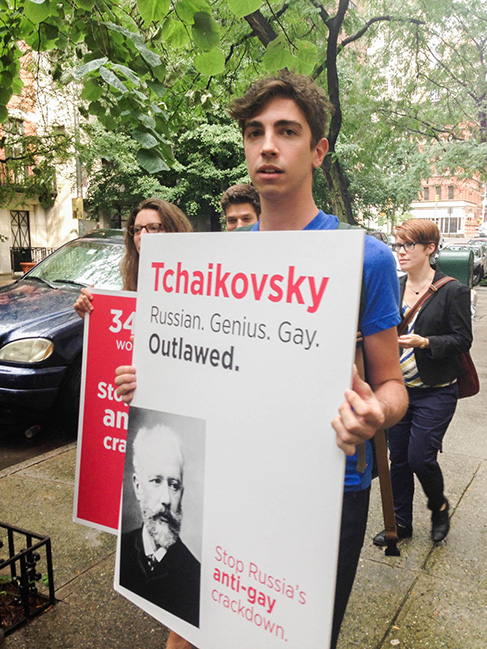 “Gays, lesbians, whomever. Blacks, whites, we are for non-discrimination,” said Churkin, to the group’s disbelief. Afterwards, Banks described the event as “great,” saying “this is the argument we want to have.” He continued, “There’s no way you could look at the facts and believe him. These people are being killed, people are being fined, organizations are being shut down, these things are happening in the news. I’m not making them up.” Despite the ambassador’s clear denials, Banks is happy overall with how the meeting went down. “I did not think they would engage,” he said. 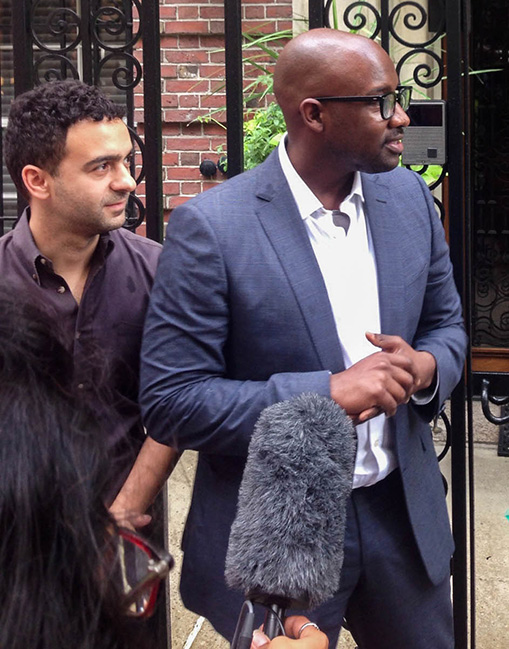 Banks and Heimans address the press. “We’ve been doing this for two years, and all of a sudden, you get this moment where everybody’s listening.” All Out says they will email the petition to the Foreign Minister’s office. 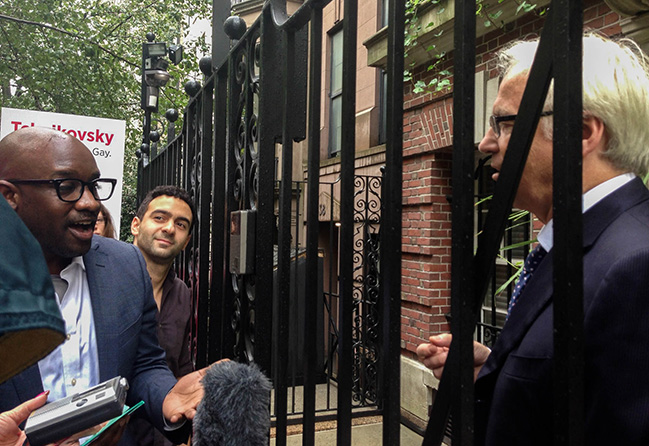 “All athletes, I can tell you, are going to be just fine. Just fine,” said Churkin. “But we do expect everybody to respect our laws.” The first half of that statement seems to be in direct contradiction to what lawmaker Vitaly Milonov has said, a co-sponsor of the propaganda bill who stated gay athletes and tourists will be arrested at the Olympic Games. While the IOC says that’s not going to happen, several prominent activists and organizations are calling for the games to be moved out of Sochi, if the laws aren’t repealed.

From Russia with hate? Gay activists dump vodka outside Russian consulate in protest

Russian neo-Nazis baiting, beating gay teens in a twisted take on “To Catch a Predator”

Down and out in Sochi: Feeling the effects of Russia’s gay “propaganda” ban