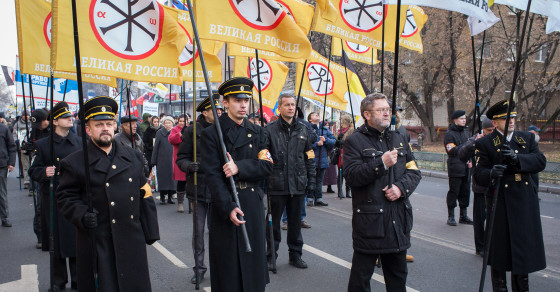 Swastikas and Snowflakes: The Weird World of Russia’s Far Right
By Marc Bennetts

Swastikas and Snowflakes: The Weird World of Russia’s Far Right 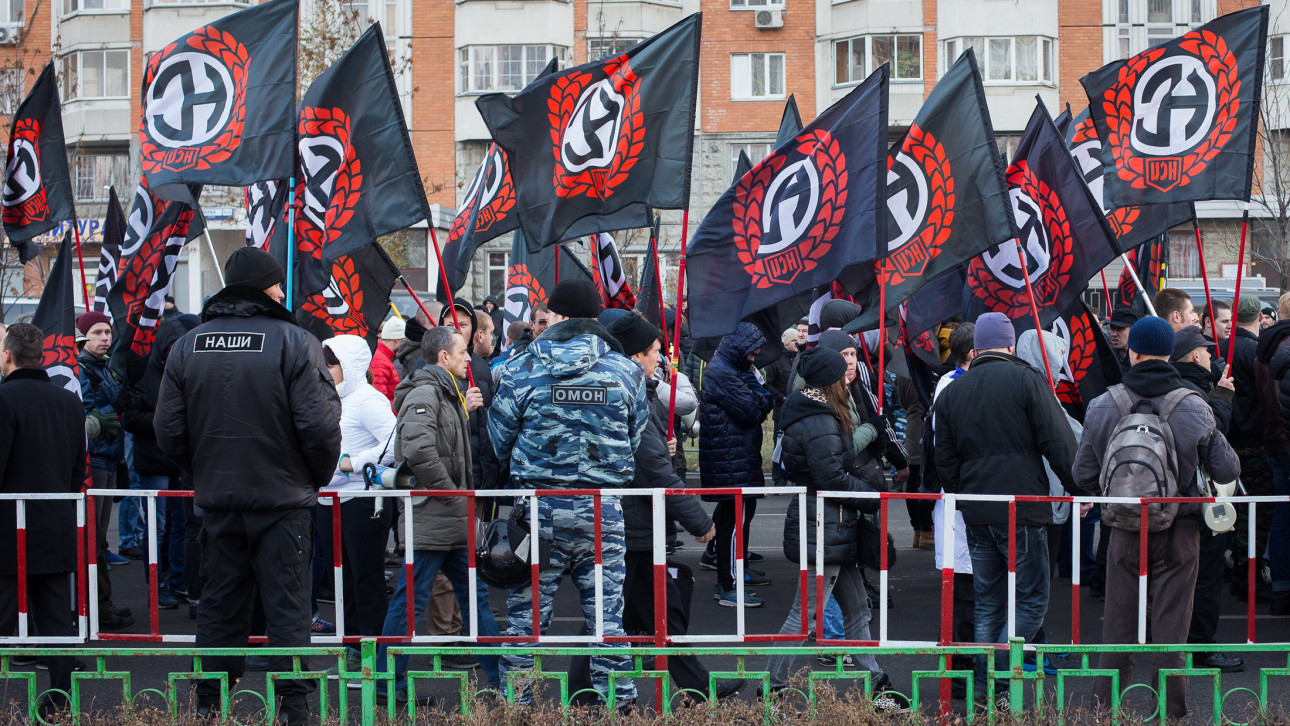 With his SS-style leather trench coat, peaked cap and distinctly swastika-like symbol decorating his armband, the man looks like he stepped out of a Hollywood movie about Nazi Germany.

“We are the greatest country in the world!” he screams through a megaphone. His name is Konstantin. As he speaks, the thousands of people gathered around him roar in approval. Nearby, a makeshift stall offers books on the “Zionist plot to rule the planet.”

Konstantin, a Russian hater of fascists who just happens to dress like an SS officer.

Welcome to what passes for an anti-fascist rally in Russia these days. Konstantin and some 3,000 fellow marchers have come to this residential area of northeast Moscow to rage against the “neo-Nazis” who they—and state-run media—claim are violently repressing ethnic Russians in Ukraine, where a popular uprising swept a pro-Kremlin president from power earlier this year.

“Down with the fascist junta in Kiev!” Konstantin shouts, echoing the term frequently used by pro-Kremlin media to refer to the new Ukrainian authorities.

I’m confused. My well-thumbed copy of the Oxford dictionary states clearly that a “junta” is “a military government that has taken power by force.” Unless I missed some major events during the almost yearlong Ukrainian crisis, I’m pretty sure that the army hasn’t seized power in Kiev. I point this out to Konstantin, who won’t tell me his last name. He doesn’t react well. “I know what a junta is!” he shouts. His face turns red with anger, and I worry that this elderly, white-haired man might be about to have a heart attack. I cut the conversation short.

Still, at least one thing is clear: These Russian nationalists really hate Nazis. I’m pleased. I mean, after all, we all agree that the Nazis were evil. But then what’s with the Third Reich fashion fetish and undisguised anti-Semitism? What exactly was this guy—and hundreds like him—thinking of when he got dressed this morning?

This bugs me, and I wander up to a burly member of the Velikaya Rossiya (Great Russia) movement to find out. Anton (he also refused to tell me his surname) scowls when I ask him about the flag he is holding. It looks just a bit like a swastika. No?

“This looks nothing like a swastika,” Anton replies, adjusting his black, peaked hat. He tries to stare me down. “Not in the least. It’s all in your head. Do you see swastikas when snowflakes fall, as well?”

“Only if they are shaped like swastikas,” I mutter, but Anton has already goose-stepped off to join his pals for another round of chanting.

This symbol looks nothing at all like a swastika. Not in the slightest. Really. It’s all in your head.

Admittedly, the Great Russia “swastika” (it’s actually the ancient Chi Rho, but hey, context is everything, right?) bears less resemblance to the notorious Nazi symbol than the flags belonging to the People’s Socialist Initiative (NSI), a virulently anti-immigrant, Moscow-based movement. In fact, the NSI flags—on display at another nationalist rally in Moscow that afternoon (yes, there were two)—are so downright Nazi that I’m momentarily dumbstruck when the NSI’s leader, Dmitry Borbov, flat out denies the resemblance.

“There’s nothing here that should remind anyone of a swastika,” Borbov tells me. I’m unconvinced and appeal to a passerby. She agrees there is, indeed, a very strong likeness. Borbov shrugs. “Who cares? We have a new symbol now, anyway.”

He pulls out a business card. The NSI’s new symbol, while still extremely sinister, is far less provocative. No swastika-style shapes in sight whatsoever. I ask what inspired this change of design. “The other one looked like a swastika,” Borbov tells me. I’m confused. What? “Well, at least that’s what people kept telling us,” Borbov says. “I don’t see it myself.”

So why are they still carrying “swastika” flags? “It’s expensive to redo all our flags and flyers at once,” he shrugs. It’s possibly the most absurd conversation of a very, very weird afternoon.

And these flags bear absolutely no resemblance to swastikas. Well, maybe just a bit.

I’m so bewildered that I don’t even bother asking this guy about his flag. Something tells me he isn’t really the chatty kind of Russian nationalist, anyway.

Another nationalists with a visibly inspired flag...

The presence of thousands of far-right groups on the streets of Moscow and other cities on Sunday, Russia’s National Unity Day, did not go unnoticed in Ukraine.

Translation: “You shouted about fascist marches in Lvov and Kiev, but we never saw them. But today we saw marches by fascists in Moscow.”

While it’s wildly inaccurate to claim that the far-right hasn’t rallied in Ukraine in recent months, it’s also understandable that Ukrainians would gleefully seize on the opportunity to point out such blatant hypocrisy in Russia. Pro-Putin media has deliberately exaggerated the influence of far-right groups in Ukraine, and has portrayed events there as a near rerun of the Soviet Union’s battle against Nazi Germany. This potent message has inspired scores, if not hundreds, of Russian volunteers to travel to Ukraine to do battle against “fascist scum.” Even those who have no qualms about dressing up like one of Adolf Hitler’s goons.

Not everyone at the marches is so blasé about the “swastikas” on display, however.

“I saw some Nazis up there,” I overhear a middle-aged nationalist whisper to a friend. “I think they might be Ukrainian fascists.” “Here?” her friend asked. “Where?” The woman glanced back nervously. “There, see?” Her friend laughed. “Those aren’t Ukrainian fascists. That’s our lot!” The woman breathed a sigh of relief. “Oh, well, that’s OK then.”