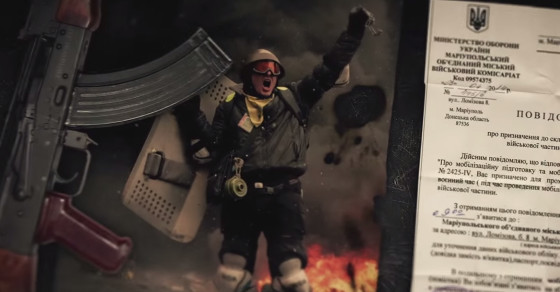 This enormously viral video-game style video from Russia might be the most artfully crafted pro-Russian propaganda yet. It’s called “I’m a Russian occupant,” and it’s about Russia’s historic “occupation” of other territories, from Siberia in the 16th and 17th centuries to the Baltic States, central Asia and Ukraine during the time of the Soviet Union. The video has amassed approximately 2.5 million views in the three days it has been on YouTube.

Aleksei Ivanov, an award-winning 45-year-old Russian writer born in Nizhny Novgorod, wrote the text narrated in the video. A user under the name Evgenii Zhurov on VKontakte, Russia’s Facebook, is the video’s producer.

Zhurov runs a group on VKontakte called “No Okays,” where he posts what he calls “anti-western works of art.” He has posted three other videos to his YouTube page, called: “Why Putin won’t send his troops to Ukraine,” “Why Americans need a big war in Ukraine,” and a violent advertisement for his group.

Translation: “The Russian occupant warns you. Don’t mess with Russia.”

The last paragraph of the text seems particularly relevant to the worsening relations between Russia and the west and/or the new season of House of Cards. The annexation of Crimea recalls the “occupations” about which the narrator speaks:

Understand, I do not need your hypocritical “freedom,” I do not need your rotten “democracy.” Everything that you call “western values” is alien to me. I have other interests! I’ll politely warn you for the last time: Do not mess with me! I build peace, I love peace, but more than anyone I know how to fight.