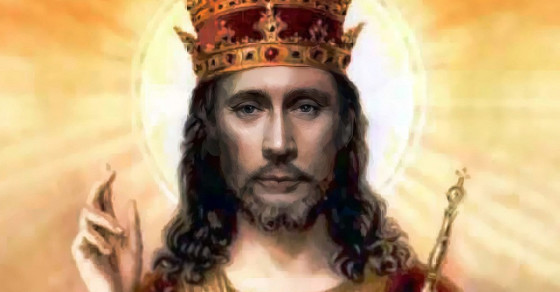 Do Some Russians Think Vladimir Putin Is God?
By Marc Bennetts

Do Some Russians Think Vladimir Putin Is God? 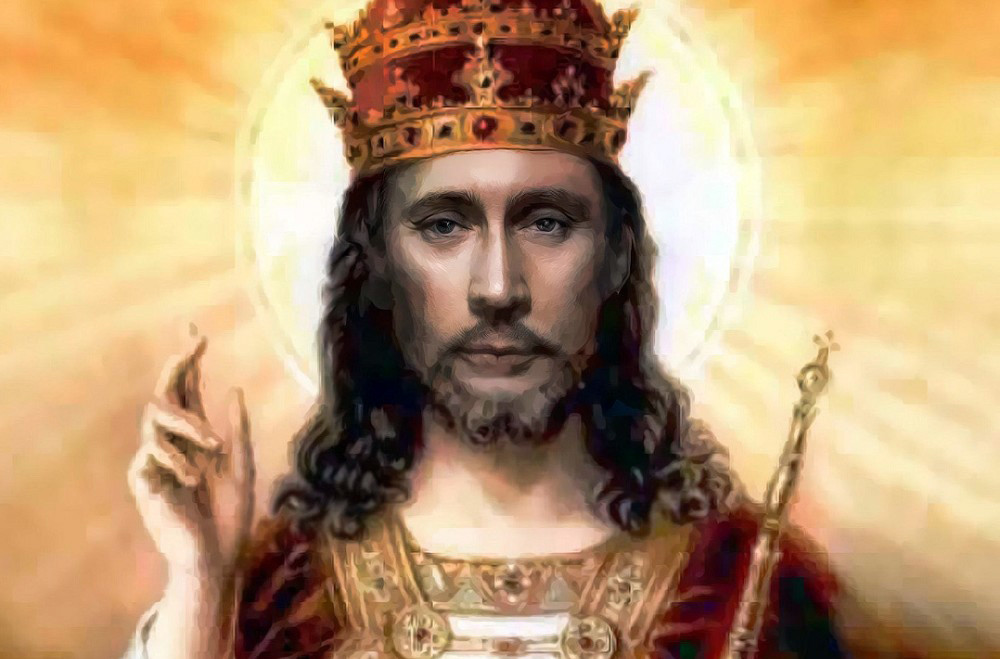 As I stand in the courtyard of a Moscow arts and craft center, a dark-haired, 20-something woman turns to me and asks: “Is this the venue for the ‘Is Vladimir Putin God?’ lecture?”

She’s not. The title of the lecture is actually “Will Putin Become God by Divine Grace?” but I decide not to correct her. Instead, I nod and show her the way to one of the oddest events in the Russian capital this year.

The lecture took place on Sunday and was first advertised by well-known radical Russian Orthodox activist Dmitry Enteo on VK, the Russian version of Facebook. In the post, Enteo promised to reveal the answers to the following questions:

“Is it possible to bow down to Vladimir Putin as God on earth?

“Will Vladimir Putin’s will fuse with the will of God?”

“Will Vladimir Putin receive endless pleasure through the completeness of the knowledge gifted to him by God?”

Not surprisingly, the lecture stirred up controversy online, as some Internet users accused Enteo of blasphemy, while others suggested he’d lost his mind.

“Let’s get this straight, Dmitry,” one VK user wrote. “Do you believe Putin will sit at the right-hand side of God’s throne when he dies?”

The lecture kicks off with a hip-hop track by an African rap duo now based in Russia. The title: “I Go Hard Like Vladimir Putin.” When the song ends, Enteo fiddles with his laptop until Putin’s face appears on the screen behind him.

The Orthodox activist then addresses the audience of roughly 80 or so Muscovites, an apparent mixture of curious hipsters and true believers. (There’s also a middle-aged man in a suit that a fellow journalist immediately suspects of being an agent of the FSB, Russia’s principal security agency.)

“I’ll keep it brief, in the style of the subject of today’s lecture,” Enteo says.

At times his voice is barely audible, but when he quotes Putin, he makes sure to speak louder.

The hipsters behind me erupt in ironic applause. Enteo presses a button on his laptop, and the photo of Putin is replaced by swirling psychedelic images and low-volume break-beats. He proceeds to read a poem by Vladislav Surkov, the mysterious Kremlin ideologue. The overall effect is an atmosphere reminiscent of a secret cult meeting held at a nightclub.

Enteo then takes us through the history of Putin’s apparent transformation from hard-nosed KGB officer to Orthodox Christian believer. “Putin realized that his goal in life was God, and the Almighty entered into the body of Vladimir Putin,” Enteo says. “Then Vladimir Putin began to do good deeds, like break up opposition meetings.”

At one point, the activist curiously declares: “We disappoint Vladimir Putin. While he tearfully prays for us at night, we smoke hashish.”

The lecture lasts about an hour, before Enteo builds on a final riff in which he determines that, yes, Putin will transform into a godlike being, and like all good Orthodox believers, eventually grow a beard.

After a brief Q&A, the crowd files out. “That was creepy,” says one attendee.

Others seem puzzled by the whole affair.

“It’s a response, in many ways an ironic one, to Putin’s de facto domination of everything from the economy to the media,” says Anna Arutunyan, author of The Putin Mystique, who attended the lecture.

“Most of it, of course, is just Enteo publicizing himself, but some of it is also taking what we see around us to its grotesque logical conclusion.”

Hipsters could not resist this "Vladimir Putin and God" teaser from Dmitry Enteo on VK.

Russians have a long history of venerating their leaders, from the reverence of the czars to the terrifying cult of personality that developed around Soviet dictator Joseph Stalin. While Enteo didn’t directly say that Putin was God, he felt comfortable posing the question, which shows just how powerful the Russian president has become.

Not everyone, of course, sees the hand of God in Putin’s politics. In Ukraine, where a Kremlin-backed separatist movement is slowly tearing the ex-Soviet state apart, the country’s spiritual leader, Patriarch Filaret, recently suggested the Russian leader was possessed by the devil.

“Like Judas, Satan has entered into him,” Filaret declared, as he accused Putin of turning the two Slavic countries against each other. “Like the first brother-killer, Cain, he has fallen under a demonic influence.”

Regardless of which side you take in the “Putin: God or Satan?” debate, it’s a remarkable development in the life of this former, low-ranking KGB operative. From serving the officially atheist Soviet state in Cold War-era East Germany to being compared to God and the devil, it’s been a long, strange road for Vladimir Putin. And it’s not over yet.