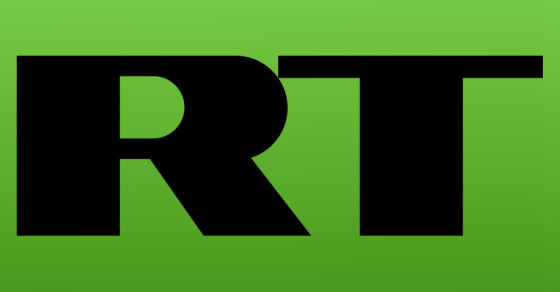 Hackers Take Over a Pro-Kremlin Website
By Versha Sharma 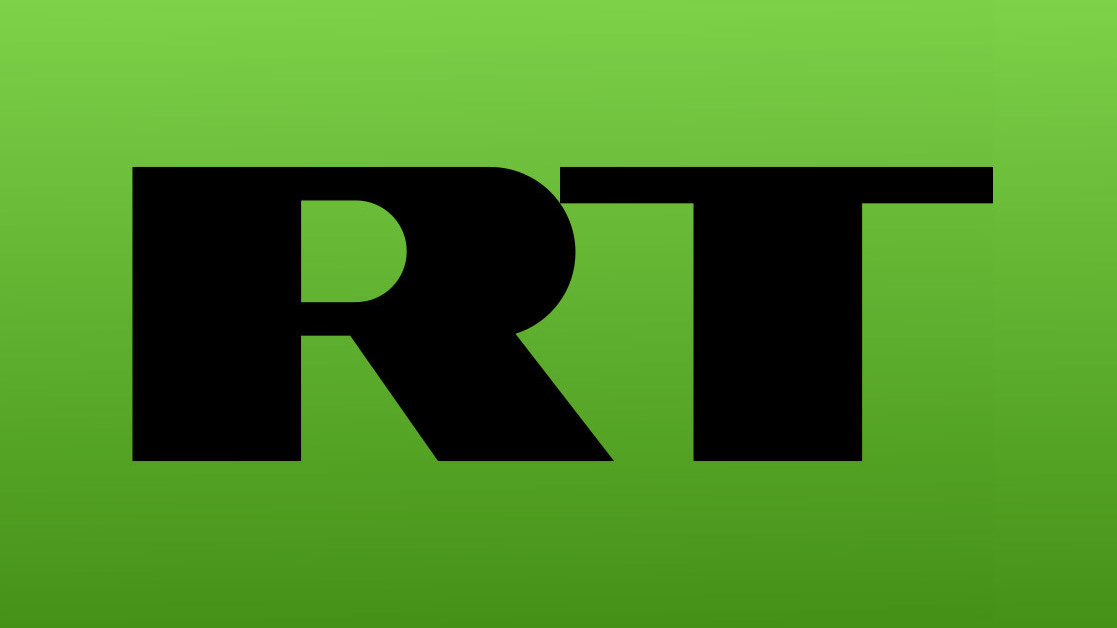 If you visit Russia Today’s website today, you’ll see reports of how Russian troops are invading Ukraine in order to protect human rights, how the West is demonizing Russia, and how the U.S. is the real villain in this crisis.

Russia Today is widely seen as an outlet for the Kremlin, looking to bolster its credibility in President Vladimir Putin’s request to parliament to send troops into Ukraine to protect Russian-speaking people.

But for an hour Sunday, the stories on the site were very different—and not nearly as flattering to Russia.

The hackers, currently unknown, replaced “Russian” and “Russia” in all of the headlines on the site with “Nazis.” Nazism and fascism have featured prominently in Russian arguments about why they should invade Ukraine. Several of the politicians who voted in parliament’s unanimous approval of the use of troops said they were doing it to fight the fascist thugs in Kiev.

RT website has been hacked, we are working to resolve the problem

Some people have suggested that Anonymous News could be behind the hack, but the famous hacktivist group hasn’t taken credit for the RT hack. It has, however, claimed responsibility for about a dozen hacks of Ukrainian government sites over the past three days, via its Twitter account @AnonOpUkraine.

Could hack of Russia Today be related to the formation of Anonymous Op #Ukraine today or another hacktivist group? https://t.co/FSb0s85hHt

The New Republic pointed out Sunday that Russia Today’s ongoing coverage did not include mentions of the hundreds of anti-war activists arrested in Moscow, which could be one reason that hackers targeted it.

Here are a few other examples of RT’s controversial reporting regarding the crisis in Ukraine:

LOL at today's coverage over at @RT_com. (h/t @daveweigel) https://t.co/GIbRJB4kab 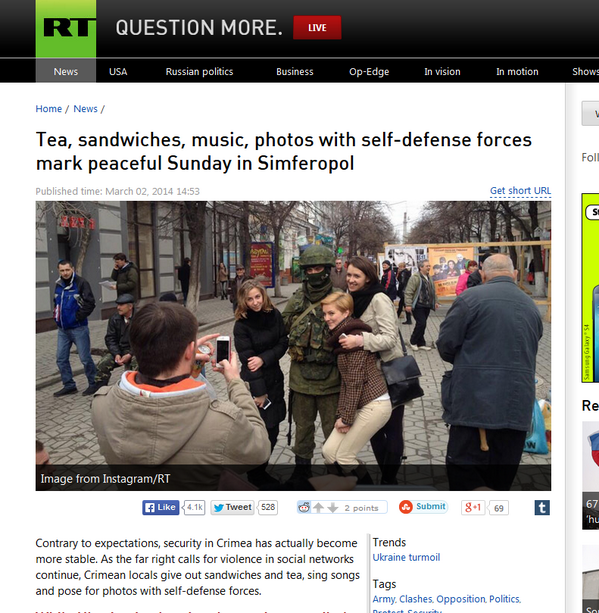 Photo: @RT_com Putin-propaganda, claims 675 000 citizens fled from Ukraine to Russia - No one noticed it until today? https://t.co/4Iwe6YLyZY 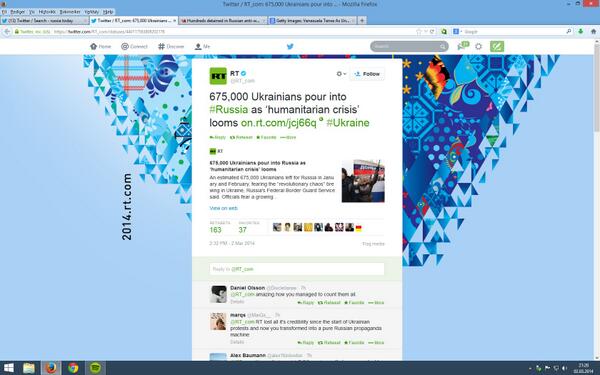 If you think appearing on Russia Today is same as appearing on 'biased' Fox (or BBC, or MSNBC), it isn't. You're feeding Russian propaganda.

Russia Today ramping up propaganda about terrorism and fascists in Kiev. Worth watching as Kremlin softens up opinion for intervention

According to Russian state TV, not only were US, German, & Polish mercs in Ukraine, but they were ALSO drunk & disruptive, because #trolling

RToday setting new standards in disgusting propaganda. Politicians make their biggest mistakes when they start believing in their own lies.

Russia Today is the only Russian news organization known to have been hacked so far, but other outlets are playing their own games of politics. The AP reports that at least 13 pro-Ukrainian protest pages on Russia’s Facebook, Vkontakte, have been blocked by the country’s media monitoring agency.