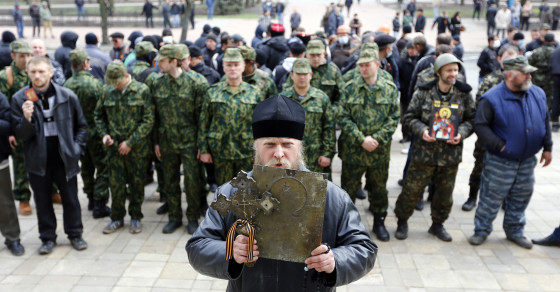 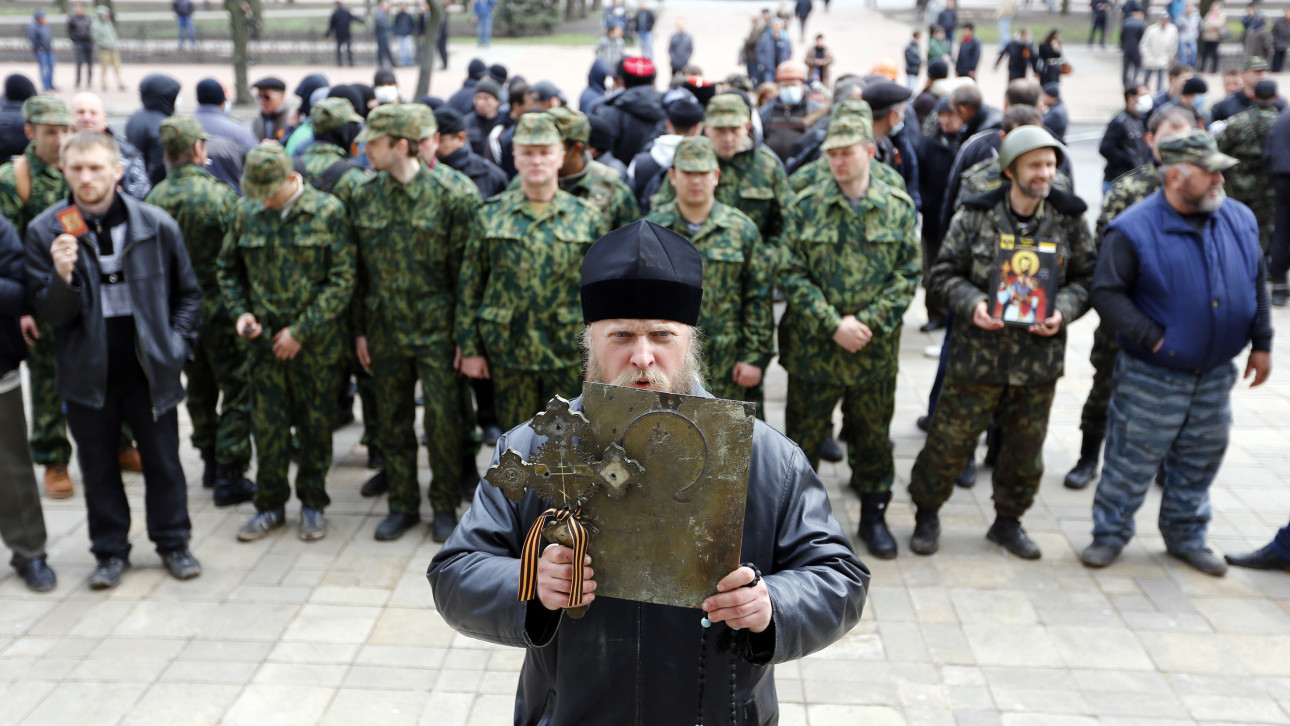 Nearly a month after the dubious referendum in Crimea asked residents if they wanted to join Russia or stay autonomous within Ukraine, eastern Ukraine is facing a similar crisis. Pro-Russian gunmen have taken over several government buildings in key cities, ignoring the government’s deadline to stand down.

Though the deadline has passed, the government in Kiev has yet to enforce it. Interim Interior Minister Arsen Avakov did say yesterday that the government is preparing “civilian protection units” of up to 12,000 armed men. Acting President Oleksandr Turchynov also said they will launch “a full-scale anti-terrorist operation involving the armed forces of Ukraine. …We will not allow Russia to repeat the Crimean scenario in the eastern regions of the country.”

But the pro-Russian forces are already on the ground—inside buildings like the regional government office in Donetsk, which has been occupied for more than a week. Ukrainians in these cities are taking to the streets to vent their frustrations at the seeming lack of action from Kiev, facing off with their occupiers.

Interior Ministry members look out from the entrance of the regional administration headquarters in Luhansk, in eastern Ukraine, on April 14.

Interior Ministry members stand near men who were injured in clashes between pro-Russian and pro-Ukrainian supporters during rallies in Kharkiv on April 13.

Pro-Ukrainian supporters walk into the regional administration headquarters in Luhansk on April 14.

The cost to human life is hard to quantify. Russian news agencies have reported that at least one pro-Russian activist was killed in Slaviansk, citing a “local militant,” while President Turchynov says a state security officer was killed in the same clashes. Several others have been wounded on both sides. “The blood of Ukrainian heroes has been shed in a war which the Russian Federation is waging against Ukraine,” said Turchynov in a televised address on Sunday.

Some Ukrainians think the government isn’t doing enough to stop the clashes and are demanding the resignation of Avakov.

Protesters hold posters of Interior Minister Avakov depicted as Batman villain Two-Face in front of the Ministry building in Kiev on April 14. The poster on the left reads, "Avakov, which side are you on? Sort it out with separatists or go away!"

A pro-Russian armed man sits near the police headquarters in Slaviansk on April 13. The government told residents to stay indoors, in anticipation of clashes between pro-Russian militants and Ukrainian security forces.

Pro-Russian men gather around a fire at a barricade near the police headquarters in Slaviansk on April 13.

A man holds an icon and a cross as pro-Russian protesters gather in front of the regional administration headquarters in Luhansk on April 14.

The Ukrainian government isn’t holding back about who it thinks is the real culprit behind the chaos: Moscow. Ukrainian leaders and U.S. Secretary of State John Kerry have accused the Russian government of sending in special forces to stir up unrest in the east, like they believe happened in Crimea. The Kremlin continues to deny such accusations.

Last week, the Ukrainian state security service said it captured a 23-year-old Russian agent, Maria Kaleda, who allegedly confessed to shooting Ukrainians in clashes in Mykolaiv and was collecting intelligence on the quality and quantity of the country’s border security apparatus. On Monday, a video surfaced of a man identifying himself as a Russian lieutenant colonel organizing local police in the southeastern city of Mariupol.

Pro-Russian protesters attend a rally in front of the seized office of the SBU state security service in Luhansk on April 14.

Pro-Russian protesters in Luhansk. Written on the makeshift shield in the back: "Obama, hands off Ukraine."

Some residents welcome the chaos. A local poses for a photo with the pro-Russian armed men standing guard outside the mayor's office in Slaviansk on April 14.

A pro-Russian separatist looks on near the mayor's office in Slaviansk on April 14.

A pro-Russian armed man stands guard at a barricade near the police headquarters in Slaviansk on April 13.