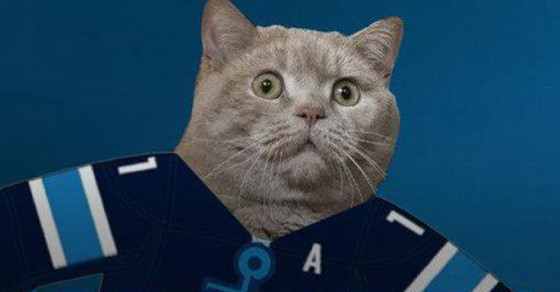 A felonious cat managed to pilfer over $1,000 worth of seafood from a grocery store in Russia’s Vladivostok International Airport on Dec. 9. An employee captured the raid on video, uploading the clip to YouTube. It’s netted more than a million views from all over the world. The search for the seafood muncher took a few days and ended with a surprising twist. After its capture, the local professional hockey club—”The Admirals”—stepped forward to adopt it. In addition to naming the furry celeb pet Matroskin and installing it as the team’s mascot, the club added pictures of the adorable criminal to its official VKontakte accounts. A homeless miscreant no more, Matroskin will reside in the Admirals’ stadium.

The hockey team’s general manager has plans to extend brand reach as a part of the team’s business plan. He promised to launch a full social media campaign and run Matroskin’s designated accounts in the mode of reigning celebrity feline, Grumpy Cat.

By the by, though the Admirals gave the beast a boy’s name, it’s since been discovered that he is actually a she. But there are no plans to change her name.

Translation: “Well, it’s time to officially recognize Matroska is a cat! And she brought us luck!”

Translation: “Wanted to grab something to eat…ended up with a 60K rubles debt.”