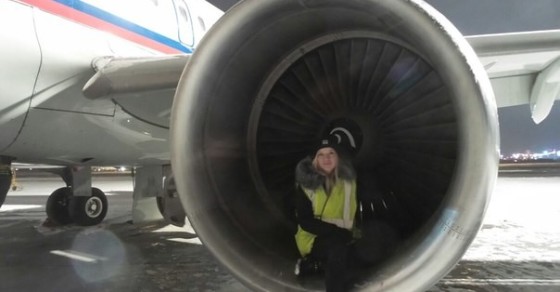 Teens Prove That Outwitting Airport Security Is Easier Than You Think

Since 9/11, airport security around the world has been increased dramatically. But despite all the body scanners and banned water bottles, a group of teens just proved that, at least in one international airport, you can go right onto the tarmac and hang out next to the airliner of your choice.

A group of Russian teens, members of the daredevil “roofer” movement, snuck on to the runway at St. Petersburg’s Pulkovo International Airport three days ago and posted their photos on VK (Russia’s largest social network). Wearing yellow vests and pretending to be employees, the teens managed to climb the fence and enter the secured runway zone and, of course, take photos posing in front of airplane engines and even in the cockpit of one helicopter. After a few more hijinks, the pranksters left the airport the same way they entered: completely undetected.

The photos first appeared on VK when user “Kosta SV” posted the pictures and a description of the caper to his personal account.

VK
The photos were picked up by local news agencies and have generated a scandal in Russia, especially after Kosta revealed via social media that this wasn’t the first time h’de managed to exploit lapses in airport security to sneak on to the runway.
VK
“Anyone can walk on the runway,” he gloated. “It may sound funny, but in fact it’s dangerous. The helicopters were open, right next to the booth with a guard, perhaps there is generally no security, or they went to drink tea.”

Yesterday, the group uploaded a YouTube video in which they climb the fence from the same spot days after the security lapse had been revealed. According to the teens in the video, a patrol car detected the group before they donned the runway worker’s yellow vests but did nothing to prevent them from entering.

Airport security procedures are cumbersome for travelers, some of whom complained, “I have to take off my shoes and send my bags to screening” after seeing the pictures. Other VK users expressed shock and concern over the break-in: “We are the leading country in the number of policemen and now this happens. Dear government, please give me back the money you spent on security.”