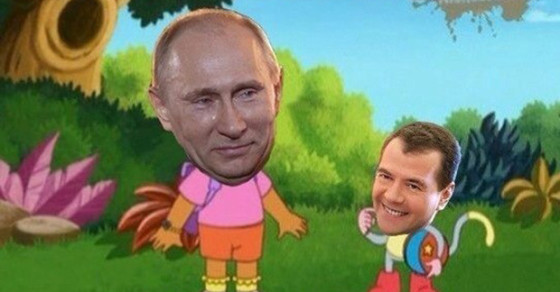 10 Putin Memes That Are Probably Illegal Now
By Sarah Kaufman The Russian government this week announced that it is outlawing Internet memes that paint public figures in an unflattering light. Which raises a big question: There are tons of hit memes on the Russian Internet — which will the government’s media watchdog, Roskomnadzor, go after first? President Vladimir Putin himself has been a popular target of meme-sters — Russians have posted hundreds of them mocking him. Here are a few that might now be in jeopardy:

When a photographer nabbed this magical moment of a hamster riding on top of a hummingbird, a genius did what anyone would do and added Putin, referencing the infamous photo of the president riding shirtless on a horse.

Translation: “Elections 2132. I will raise Russia from its knees.”

Translation: “Hitler!” In Russia, politics is often a battle of the “neo-Nazis.” Calling someone a Nazi is lately just a fancy way to say you disagree with them.

Translation: “I will never give anyone my precious Russia.”

Translation: “Don’t worry, brother, when I take over America, you’ll get your Oscar.”

Translation: “In order to improve the security and stability, the Federation is going to be reorganized into the First Galactic Empire.”