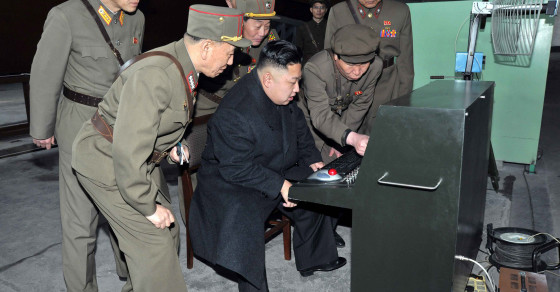 Someone Just Switched Off North Korea’s Internet
By Eric Markowitz

Last week, President Obama promised a “proportional response” to the North Korean hackers behind the Sony data heist. It looks like the Obama administration may have just followed through on that threat. Today, North Koreans lost pretty much all of their access the Internet.

Cloudflare, the Internet security company, said that North Korean access to the Internet was “toast.” Basically, for precious few who actually have computers connected to the world wide web, it’s 24 hours a day of 404 service denials. It’s not clear yet who’s responsible for North Korea’s internet going offline (some are even claiming it’s the work of the hacker collective Anonymous) but the attacks apparently began Friday and continued through the weekend.

Doug Madory, director of Internet analysis at Dyn Research, explained that the North Korean servers were apparently hit by a denial-of-service attack, which basically wiped out the country’s Internet grid.

“I haven’t seen such a steady beat of routing instability and outages in KP before,” he said in a statement. “Usually there are isolated blips, not continuous connectivity problems.”

The White House won’t confirm they’re behind the attack, but the timing of Obama’s statement and the North Korean internet outage seem just a tad too coincidental.

“We have no new information regarding North Korea today,” a spokesperson told Bloomberg in a statement. “If in fact North Korea’s Internet has gone down, we’d refer you to that government for comment.”