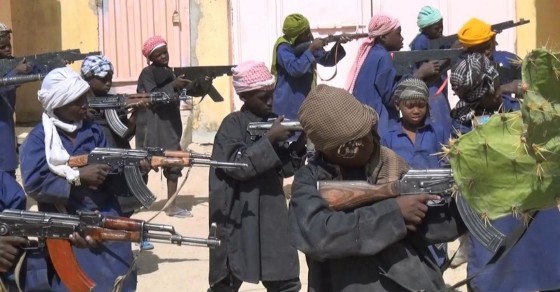 ISIS May Be Partnering With Boko Haram On New Media Outlet

Nigeria-based extremist group Boko Haram announced last week the creation of a new media outlet with an accompanying Twitter account, marking a huge turn in the group’s propaganda strategy. Crucially, its videos may have been uploaded through ISIS channels, signaling a new relationship between the two forces.

Called al-‘Urwah al-Wuthqa, or The Indissoluble Link, the new outlet has posted high-quality photos and videos promoting Boko Haram’s operations. According to expert in Islamic State online networks J.M. Berger, an ISIS-media individual uploaded the video, and upon its release, top ISIS officials and media outlets promoted it.

PRTs — Importantly the latest BH video was uploaded by an ISIS media guy and is being distributed by ISIS media channels.

Jihadology, a blog analyzing jihadi material, speculates that the change may mean Boko Haram is partnering with ISIS in some way:

We still need more sustained evidence of this to fully say for sure, but this signals that things are heading in an interesting direction for JASDJ [Boko Haram] and possibly a more formal relationship with the Islamic State and/or another Islamic State announcement of annexation of new wilayat (provinces) in the coming months if not year.

Boko Haram fighters killed as many as 2,000 people and destroyed thousands of homes on Jan. 3 in two northeastern Nigerian towns, the largest attack by the group reported yet. The group killed a total of 11,245 people in 2014, according to estimates by the Council on Foreign Relations.