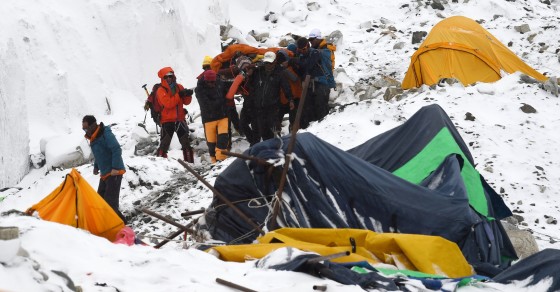 A dramatic video has surfaced of the massive avalanche that hit a Mount Everest basecamp after the Nepal earthquake which hit on Friday. A German climber posted it to YouTube Sunday afternoon.

“The ground is shaking,” Josh Kobusch said in the video, chuckling as he filmed himself walking around the camp. Then 19 seconds later, Kobusch and another unidentified person are buried under a violent rush of snow and debris, with Kobusch apparently cursing and in disbelief that he is still alive.

Kobusch, 23, is an accomplished alpinist–the youngest person to have ever climbed Ama Dablam, a 6,812-meter peak in eastern Nepal, which he summitted in June 2014, according to Gripped magazine.

Advances in connectivity and social media have brought us almost real-time updates from this remote Himalayan outpost even as the devastation after the earthquake. As one YouTube commenter writes about the video, “It’s awful that people were killed, but this is really awesome.”

Many have criticized the media for focusing on those who died climbing Mount Everest more than the thousands who perished in Nepal. An Indian mountaineering team told Reuters they found 18 dead on the mountain after Saturday’s avalanche during the start of prime climbing season. Among the dead was a veteran Google executive, Dan Fredinburg.