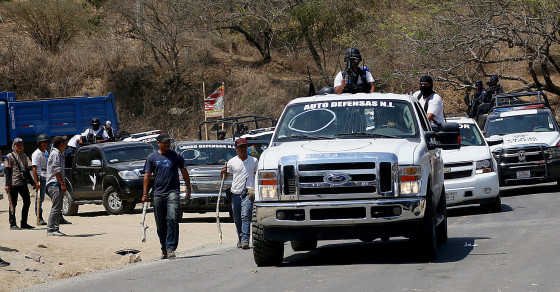 Are Mexico’s Vigilantes Actually Working for the Drug Cartels?
By Jan-Albert Hootsen

Are Mexico’s Vigilantes Actually Working for the Drug Cartels? 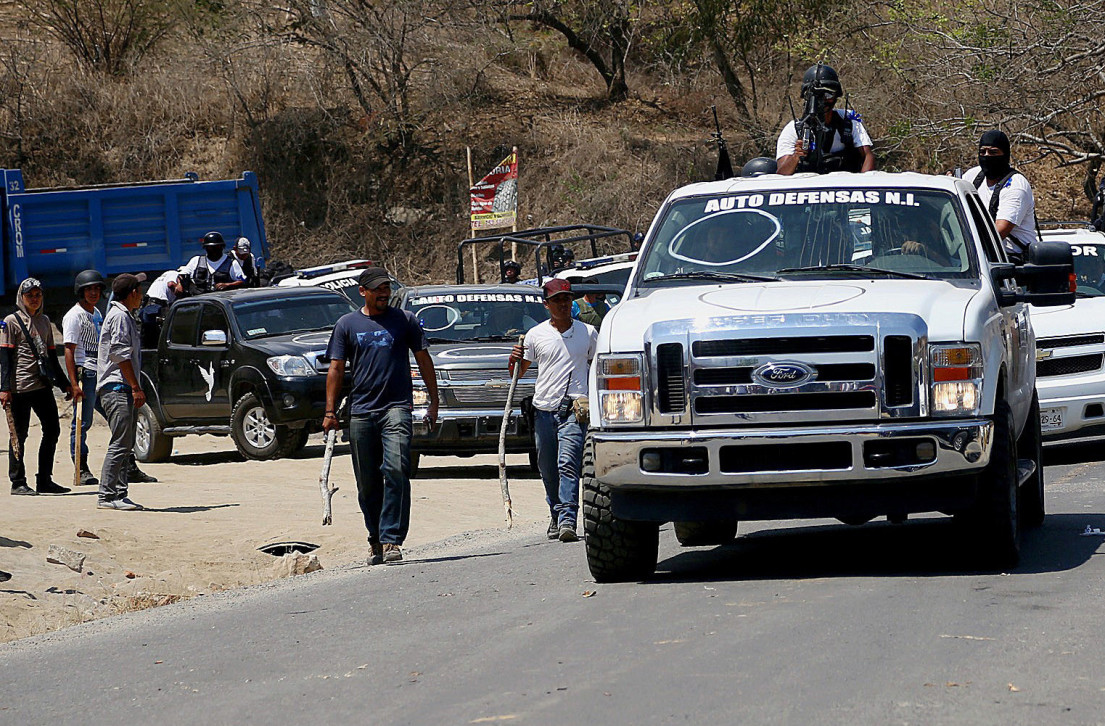 To many in Buenavista, a small town in the central Mexican state of Michoacán, Luis Antonio Torres is a hero. The Texas-born vigilante, known as “The American,” was one of the first commanders of armed citizens who rose up against the Knights Templar drug cartel, which was extorting local farmers and taking control of their lucrative cattle ranching business, among other things.

Luis Antonio Torres Gonzalez, known as "El Americano," a leader of the militia movement, shows off a pistol he says was confiscated from the Knights Templar drug gang.

Yet for others here in central Mexico, Torres—a hulking man with a shaved head and a grim demeanor—represents the fear that these vigilantes, or autodefensas, are nothing more than bad guys in disguise. Torres is allegedly linked to the Viagras, a group of hit men who once worked for the Knights Templar and another cartel called Jalisco New Generation before signing with the vigilantes. He has always denied any links to criminal gangs, but his actions raised eyebrows across this rural state when early last month he led a caravan of trucks filled with heavily armed men into the town of La Ruana, reportedly looking to pick a fight with the local vigilante group for allegedly ordering the murder of a man suspected of being the leader of the Viagras.

More than a year has passed since the autodefensas—with the help of Mexican soldiers and police officers—vanquished the Knights Templar. But now the vigilantes are controlling the gang’s old turf, and many fear these so-called citizen soldiers won’t meet the government’s demand to lay down their arms by May 10. Instead, a growing number of people in the area are afraid that the fledgling armies will mutate into yet another violent cartel.

“The story of armed vigilantes turning into violent crime groups is nothing new in Michoacán,” says Luis Felipe Rosiles, a reporter for Michoacán-based news portal Quadratín. “The signs are already there: the infighting, the lack of transparency and the fact that it’s now clear there are criminals among them.”

Back in 2000, when the Gulf cartel and their enforcers, Los Zetas, dominated the state’s criminal worlds, a small group of evangelical Christian vigilantes took up arms to fight them. Several years later, that group evolved into a cartel in its own right—La Familia—which began selling drugs, kidnapping locals and extorting their families for profit. Over time, La Familia rebranded itself as the Knights Templar, the enemy of the current vigilante movement.

Now the cycle seems to have begun again. Earlier this week, vigilantes led by their commander, Estanislao Beltrán (aka “Papa Smurf”), moved into the town of Huetamo in eastern Michoacán, after learning that group of cartel members—posing as vigilantes—had kidnapped four of their comrades and killed another. Beltrán and his group captured 44 men they say belong to the Jalisco New Generation, which is based in nearby Jalisco state.

“We checked their ID cards, and we found they were all over the country, but none of them were actually from Michoacán,” Beltrán says. “These guys were sent by their bosses to our state with the obvious goal of setting up criminal operations while posing as our men.”

While analysts say most members of the group are honest citizens who genuinely want to get rid of the criminals, some seem to be more opportunistic. “When the vigilantes started gaining ground, they attracted all kinds of people,” says Rosiles. “Some are former members of the Knights Templar who got in trouble with their bosses. Others may be members of rival cartels trying to infiltrate the vigilantes to gain a foothold in Michoacán.”

One of the leaders of a self-defence group, Estanislao Beltran (aka Papa Smurf), speaks on April 22 at the entrance of Arteaga, in the state of Michoacán, Mexico.

Infiltrating the ranks of the vigilantes has proven to be good cover. Ever since the first citizens of the Tierra Caliente region in southwestern Michoacán rose up in arms against the Knights Templar, they have successfully won over public opinion by presenting themselves as farmers turned genuine crime fighters. By welcoming journalists to visit their checkpoints and even joining them on their hunts for Templar members, they often gave the impression of honesty and transparency. It’s the perfect front for a bad guy trying to look legit while carrying an AK-47.

In reality, however, these groups are far less transparent than they seem. Many appear to be centrally organized, but in fact are loyal to their own leaders, have their own arsenals and their own fleets of makeshift armored trucks. Nobody knows the exact number of vigilantes (observers estimate there are about 10,000 of them), how many weapons they have or the truth about their past.

The real problem, Rosiles says, is that the state’s drug trafficking routes are worth billions of dollars per year. And the Knights Templars are involved in much more than drugs. Their extortion and kidnapping rackets alone make them an estimated $3 million per municipality, per year. The cartel is also suspected of being deeply entrenched in the smuggling of iron ore from the port city of Lázaro Cárdenas.

“If the government does nothing to disrupt them,” says Rosiles, “chances are we’re now simply witnessing the birth of yet another…drug cartel.”