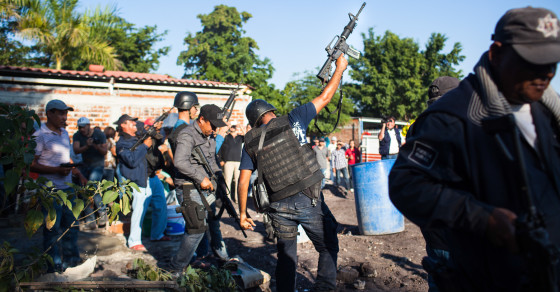 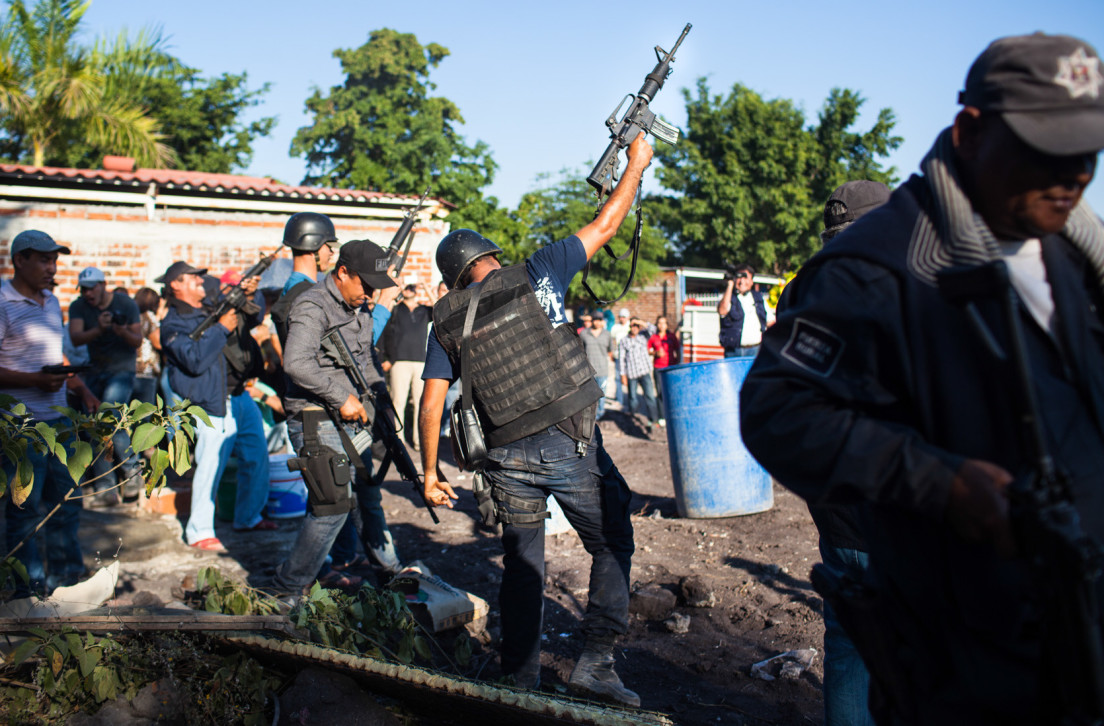 LA RUANA, Mexico – The 20 men, wearing blue uniforms, helmets and bulletproof vests, aim their rifles into the air. A deafening barrage of gunfire echoes through the cemetary, followed by applause from the crowd gathered behind them. “We will avenge you, Manuel!” a girl screams.

A group of vigilantes fire guns at the funeral of one of their members in La Ruana, in the Mexican state of Michoacán.

This quaint town of 10,000 people in central Mexico, surrounded by lime groves and cattle ranches, was supposed to be a model of populist revolution, a case study in what happens when citizens rise up and reclaim their towns from criminal gangs. Instead, it’s devolved into one of the most dangerous spots in the country.

For decades, La Ruana and the surrounding towns were run by the drug cartels that dominate the lucrative meth and weed trades. Murder, kidnapping and extortion were part of daily life. Then earlier last year, some fed-up residents decided to create their own militias to drive the drug traffickers out of town. Their plan worked — dozens of cartel members died in the shootouts, hundreds fled. But something even worse has filled the void: La Ruana is now in the grip of a civil war between rival militia groups that are literally killing each other to gain control of the town. Many here now accuse these same groups of having taken up the drug trade themselves.

It’s in some ways a metaphor for the state of the country. President Enrique Pena Nieto, facing mass protests over rising levels of violence, has pledged to make Mexico safer. He has sent troops into various towns, including many in the central state of Michoacan, where La Ruena is located. But the quest to pacify Mexico has mostly been a failure, because beyond the infusion of soldiers and federal police, the government hasn’t found a way to stop corruption and organized crime from seeping into daily life.

The wife of Manuel Mora (name withheld), center, looks over his casket.

La Ruana is divided between the men of Hipólito Mora, a lime grower, and those loyal to Luis Antonio Torres, aka “The American,” a U.S.-born strongman from the nearby town of Buenavista. “I don’t think there is a way this can be settled peacefully,” says Juan Escobedo Padillo, a 63-year-old farmer in town. “There is too much hatred. Whole families are torn apart. People living two blocks apart want to kill each other.”

When I visited last week, La Ruana was on edge, as hundreds of people braved the scorching heat to attend the funeral of Manuel Mora. Hipolito’s 33-year-old son was gunned down during a massive shootout between the rival militia groups. The two sides fought each other for almost two hours with automatic weapons and grenade launchers. When the dust had settled, 11 people were dead.

La Ruana is a town of dusty streets and concrete houses, divided by a narrow, dirty river. Everyone here lives within a mile or two of each other, but many are afraid to go out. A number of people I talked with during my visit said they felt safer when the cartels were in charge because at least the violence was more predictable.

What triggered the meltdown in La Ruana was the creation early last year of Grupos de Autodefensa, or Self-Defense Groups. These militias were formed by the residents who took up arms against the Knights Templar, a drug cartel that had terrorized the region for years.

Hipolito Mora, who heads one of the two militia groups in La Ruana, during the wake of his son, Manuel.

Hipólito Mora was the first Autodefensa leader in the region, and Torres followed suit in nearby Buenavista. The militia leaders, who accused state and federal authorities of doing nothing to stop the cartel, set up checkpoints, patrolled roads and chased the narcos out of nearby towns. Several hundred members of the Knights Templar were killed in these small-scale battles.

In February, President Peña Nieto appointed Alfredo Castillo, a close political ally, to restore order the state. He armed, trained and regularized the militias that had popped up in Michoacan, integrating them into the newly formed Rural Force. But even as the militias teamed up, tensions among the self-defense groups began rising. Leaders accuse each other of extortion and drug trafficking and of having ties to the Viagras, a new gang that apparently filled the vacuum created by the Knights Templar.

Last week, several hundred Rural Force members organized statewide protests, blocking highways and burning their uniforms. One group accused police and government officials of protecting criminals. and announced it would separate itself from the Rural Force and become an independent militia again.

“We know that The American welcomed members of the Knights Templar into his group,” said a tearful Hipólito Mora last week, at the spot where his son was killed, surrounded by car wrecks riddled by bullets. “We know exactly what he’s like. He is the person I hate most in the world.”

Jesús Valencia, center, and other members of his militia group H3, talk outside the wake of Hernan Valencia, his brother.

Barely two miles away, 42-year old Jesús Valencia could hardly contain his anger when confronted with those accusations, as he sat near the casket of his 33-year-old brother Hernán, who also died at the shootout. Dozens of friends and family came to pay their respects at the wake. As they sipped beer and reminisced, militiamen armed with automatic rifles stood guard. Valencia is one of Luis Torres’ closest lieutenants. “Mora is nothing but a charlatan,” he said. “He took the properties of people who fled the violence. The people don’t want him here.”

Fearing more violence, the government sent soldiers and federal police to La Ruana to restore order last week. and Michoacán’s Security Commissioner Castillo announced more than 50 arrest warrants stemming from the shootout, including both militia leaders. He claims the clash was impossible to avoid, because it’s a “personal matter” between Mora and Torres.

Mexican Army guard a ranch owned by Hipolito Mora, one of the militia leaders in La Ruana.

But here in La Ruana many feel the government is largely to blame for the outbreak. “Castillo came to Michoacán with the idea of imposing his authority,” says Miguel Ángel Sánchez, director of Quadratín, a news agency based in the state. “But in reality, by regularizing the self-defense forces, he not only regularized the legitimate businessmen who want to defend their families, but also those involved in drug trafficking.”

Many here in La Ruana fear it’s too late to save the town from being torn apart by violence. Members of both militias believe dialogue is no longer an option. The hatred now runs so deep that it has torn families apart. “When the shooting took place, I was with Hippólito’s men, but my brother was fighting for The American,” says Isaías Anaya Díaz, a militia member standing guard at the check point where his leader’s son was killed. “If I would face him again, I wouldn’t hesitate to kill him. I don’t care if he’s my brother.”