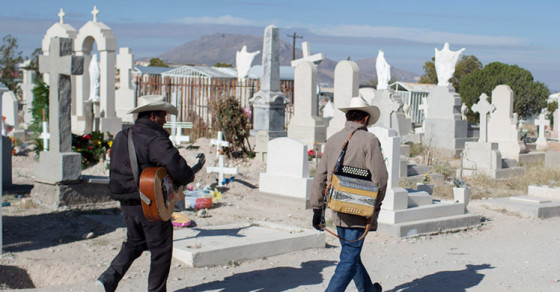 Dead Beats: The Graveside Musicians of Juárez
By Jan-Albert Hootsen 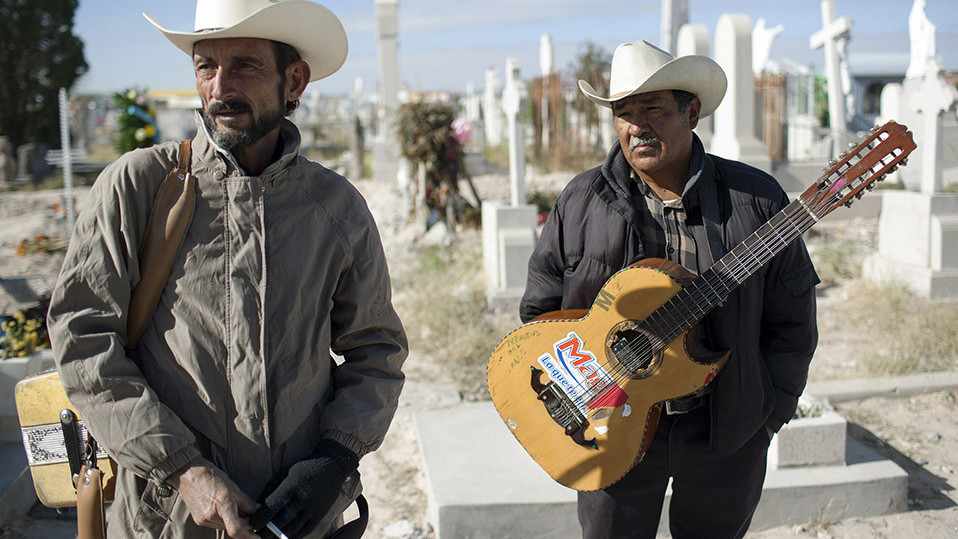 CIUDAD JUÁREZ, MEXICO—Domingo Pineda tries to tune his instrument, but the old guitar has trouble keeping a note in the chilly winter of northern Mexico’s desert. Meanwhile, Mario Muñoz rubs his hands to rid his fingers of the cold. The men begin to play an upbeat melody with gloomy lyrics: “A wooden cross of the most simple kind/ Is all I ask for when I die.”

Domingo Pineda (with guitar) and Mario Muñoz (with accordion) belong to a band named Si Kantamos Norteno that performs in the Tepeyac graveyard in Ciudad Juárez, Mexico.

There is no applause when the song ends, only the silence of hundreds of tombstones. The Panteón Tepeyac, the oldest and largest graveyard in this border city, is not exactly a glamorous stage. It is a dilapidated place; tombstones are crumbling and tilted, piles of garbage separate graves marked by the wooden crosses of people who couldn’t afford marble or concrete. But Muñoz and Pineda feel at ease here. Their graveyard band, Si Kantamos Norteño, has been playing at the cemetery for almost five years, serenading the dead and comforting grieving families who come to bury their loved ones.

They are part of one of Mexico’s richest cultural traditions: the celebration of death. In a country where Our Lady of the Holy Death is a folk saint and the Day of the Dead is one of the most important holidays of the year, funerals are often musical and festive. “Music is an important part of Mexican culture,” says Muñoz. “Many people have difficulties expressing their sadness when they’re at a funeral, but the music helps. It channels their grief.”

For Muñoz, 52, and Pineda, 60, singing to the dead is their bread and butter. They come to the graveyard every day, waiting for a funeral or people visiting a grave. For 50 pesos ($3.50), they’ll play a corrido, a type of narrative song popular in this part of Mexico. Sometimes they are even asked to play without an audience. “There’s a man who comes here every month and gives us money to play a song at the tomb of his father,” Muñoz says. “He never stays. He says he doesn’t like graveyards. So we end up playing alone at the tomb.”

Mario Muñoz plays in front of a tomb at the Tepeyac graveyard. Sometimes he and his partner are paid to play for dead people.

He and Pineda first met over 20 years ago, when they were both working in La Mariscal, a neighborhood in Ciudad Juárez’s center that is rugged like a frontier town in a Western film. They played the cantinas, traditional working-class bars popular among both Mexicans and American tourists crossing the border from El Paso. “It was a good way of making a living,” recalls Muñoz with fondness. “Playing music to me means freedom, a way to express myself. I could never stand being bossed around.”

But in the 1990s, the cantina culture in the city went into steep decline. Unemployment and poverty increased, and musicians began to struggle. Then came the violence.

Ciudad Juárez has always been a lawless city and a lucrative corridor to smuggle drugs to the United States. In the 1990s, the city was the domain of the Juárez Cartel, then led by drug lord Amado Carrillo Fuentes, nicknamed “Lord of the Skies” because of his fleet of Boeing 727 aircraft he used to fly drugs over the border. But in 2008, Mexico’s most powerful drug lord, Joaquín “El Chapo” Guzmán, from the rival Sinaloa Cartel, decided to take over the city. As the gunmen invaded, Juárez was beset by horrendous gangland warfare that eventually claimed some 12,000 victims, and the town became the world’s murder capital.

“The city’s nightlife was completely wiped out,” says Pineda. “People didn’t want to leave their houses anymore out of fear for stray bullets. Most cantinas went bankrupt.”

Domingo Pineda and Mario Muñoz wait for customers in the Tepeyac graveyard.

After losing their gigs in La Mariscal, they decided to relocate to the cemetery. They already played there once a week, and they knew it was the only place left for them to make some money. The violence, however, moved with them.

“When we first started playing here, there were maybe one or two funerals per day,” Muñoz says. “But during the height of the violence, we sometimes had 10 every day. And the dead were younger—teenage girls, young guys working for the cartel. Times were bad.”

They would play at gangsters’ funerals, too. Those were rowdy occasions, and sometimes dangerous. Muñoz shows a bullet hole in the metal roof of a cage built over a tombstone. “Friends of a dead gunman could get pretty aggressive. Our songs would rile them up so much that they’d take out their gun and start shooting at the tombstones.”

A view of Tepeyac graveyard, the biggest in Juárez, on Nov. 13.

Over the last three years, the violence in Juárez has subsided. But as the homicide rate has dropped, life for the musicians hasn’t improved. Even though the city once again has a thriving nightlife, the old cantinas are gone forever. And here in the Tepeyac cemetery, earnings are meager. On an average day, they make maybe 80 pesos ($6).

“I don’t really like playing here, because I don’t make enough money,” says Pineda. “But we don’t have much of a choice. This is what we know and what we do, and there’s no other place in the city left to work for musicians like us.”

Muñoz agrees it’s not an easy way to make a living. “But I do like the ambiance,” he says. “It’s quiet here. There’s no stress, no discussions about the president or football, no kids running around.” He pulls a notebook out of his pocket, its pages scribbled with lyrics, and grins. “And I can write songs here, not exactly easy at home with my wife around.”