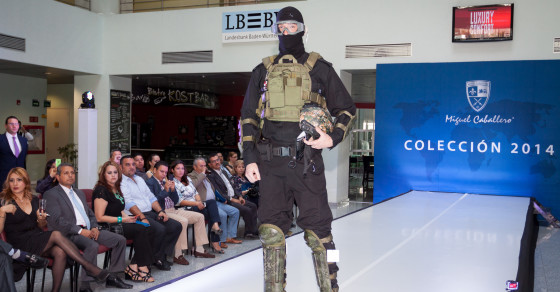 When a Blazer is a Bulletproof Vest
By Jan-Albert Hootsen

When a Blazer is a Bulletproof Vest 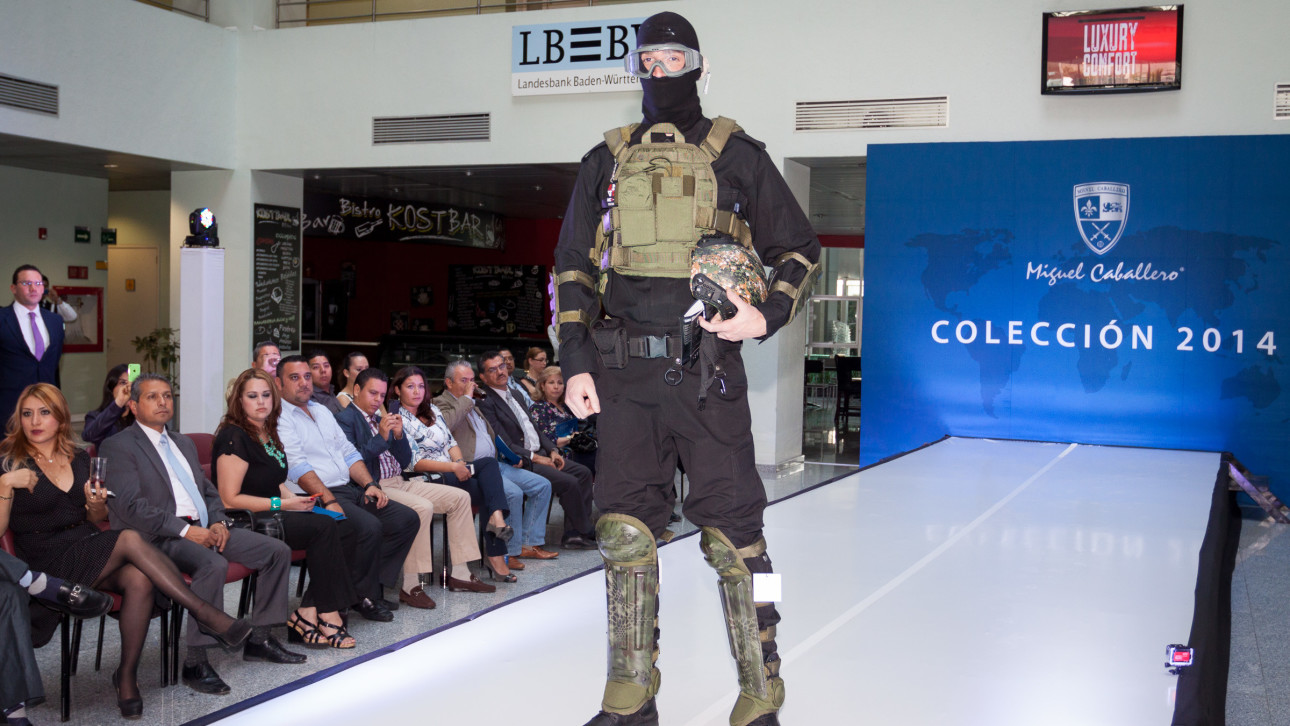 MEXICO CITY—It looked like any other fashion show, only it wasn’t. On a recent Friday night in this sprawling capital city, a tall, blond model slowly made his way down the catwalk, wearing a stylish, but seemingly ordinary, black leather jacket. If you peered closely enough, however, you might have noticed a slight bulge in the chest area. That’s where half an inch of armored plating was sewn inside the jacket, which is capable of stopping a 9-millimeter bullet.

On the surface, fashion and body armor don’t seem to be a good fit. But here in Mexico, where tens of thousands have died in a decade-long drug war, staying safe and looking fly sometimes go hand in hand. The event on Friday was a rare one: a fashion show featuring exclusively bulletproof clothing. And at the center of it all was the man whose eponymous line has become the intersection of fashion and firearms: Miguel Caballero.

Over the past two decades, the Colombian-born designer has clothed the rich, famous and seemingly at risk—from Barack Obama to Steven Segal. Today his multimillion-dollar company, which has opened stores in Mexico, Guatemala and Colombia, boasts the ability to bulletproof any article of clothing. And Cabellero is fond of persuading employees, journalists and others to take one in the chest while wearing his garb.

The company now offers three different styles, which Caballero showcased on Friday. There’s a ballistic line, which sells body armor for the military. There’s the Turer collection, which features leather jackets and boots fit for a motorcycle gang. And then there’s the Black collection, a trendy line of bulletproof blazers, shirts and even women’s handbags. (The latter two protect people from only 9-millimeter bullets; stopping higher calibers tends to require military-grade body armor.)

The “Armani of Armor,” as some call Caballero, wasn’t present at the fashion show, though there were a host of prospective clients, like Henny Forzanti, who sells bulletproof apparel in his native Venezuela. “There are plenty of companies out there that make bulletproof clothes,” he says, “but none as artistically as Caballero.”

These clothes aren’t designed for everyone. Prices in the Black collection range between $1,500 for a simple bulletproof T-shirt to up to $3,500 for a reinforced leather jacket, though standardized ballistic armor can be cheaper and specially requested items more expensive. It’s not difficult to imagine why; the clothes are relatively lightweight and far more comfortable than your average bulletproof vest. They also look almost exactly like normal attire, which is a big part of the appeal.

Caballero started his business in 1992 in his native Colombia. At the time, the country was mired in a bloody civil war as guerrillas, paramilitary groups and drug cartels ruled the streets. Rich families and politicians were often targeted for kidnapping. Some showed up to school wearing bulletproof vests. Caballero, then a student studying business in Bogotá, the Colombian capital, noticed how many of his classmates were struggling with clumsy, heavy bulletproof jackets. He began thinking about ways to make their vests lighter and more attractive.

Today the company can make bulletproof clothing that weighs as little as 3 pounds, whereas an average kevlar vest can weigh up to 8. The key to the company’s success seems to be research and development. According to Muñoz, more than 30% of the company’s budget (annual revenues are about $20 million) is devoted to R&D. “Our growth isn’t very linked to insecurity, but rather to new types of ammunition that hit the market,” he says. “Our goal is always to make the clothes more comfortable and lighter.”

This year’s Black collection features a selection of bulletproof clothes designed especially for women. Many items in the women’s line features curved armor chest plating. “Many vests sold in the market used by women carry flat armor plating,” says Muñoz. “Let’s just say people don’t take the female anatomy into account.” The goal of the curves: to absorb the energy of a striking bullet while making sure it doesn’t harm a woman’s breasts.

For all the company’s success, Caballero has received his share of criticism. Tucked away in a corner of the company’s store in Mexico City are roughly a dozen backpacks that sell for about $300 a piece. They are part of Cabellero’s children’s line. He released the collection early last year, shortly after the Sandy Hook Elementary School massacre in Newtown, Connecticut. There was a sudden surge in demand for protective gear for children, and Caballero didn’t hesitate to release a product, which also included bulletproof shirts meant for teachers. It provoked angry reactions from people in the U.S., some of whom accused Caballero of trying to profit from the tragedy—something he denies.

Friday’s fashion show did not include any children’s clothing; it was mostly aimed at high-end customers in Mexico, who sipped white wine and munched on ham serrano, as Brazilian models paraded through the crowd, sporting Cabellero’s bulletproof attire. Safety, it seems, can also be chic.