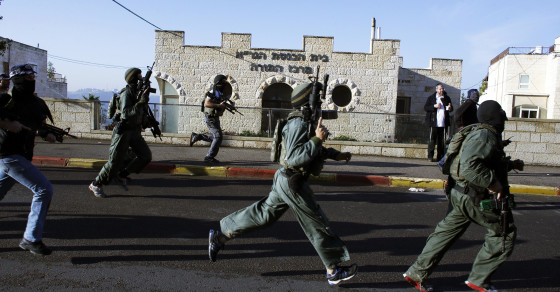 In one of Jerusalem’s deadliest incidents in years, two men armed with axes, knives and a gun attacked worshippers at a synagogue on Tuesday morning, killing five people and wounding at least a dozen, police said.

Three of the victims were Americans with Israeli citizenship, another was a British-Israeli national and the fifth was an Israeli police officer.

A Video of the Shootout With Police

The attack occurred around 7 a.m. at the Kehilat Bnei Torah synagogue complex in Har Nof, a primarily Orthodox Jewish neighborhood in West Jerusalem. Police quickly arrived at the scene, and a shootout ensued with the attackers, Odai Abu Jamal, 21, and Ghassan Abu Jamal, 31, two Palestinian cousins from the eastern part of the city.

The authorities killed both in the melee. Israeli security forces later reportedly raided the homes of the families of the assailants in the East Jerusalem neighborhood of Jabal al-Mukabbir and arrested some of their relatives.

It’s unclear if either of the men were affiliated with Palestinian militant groups. But Tuesday’s attack followed a spate of others by Palestinians in recent months, as well as a series of demonstrations and clashes between Palestinians and Israeli police.

A view of what Muslims call the Noble Sanctuary and Jews call the Temple Mount.

The attack on Tuesday, like those proceeding it, appeared to be related to rising tensions over access to a holy site in Jerusalem’s Old City, which Jews called the Temple Mount and Muslims call the Noble Sanctuary.

For years, non-Muslims have been allowed at the site only during certain hours and haven’t been allowed to openly pray. But Jewish activists have been lobbying for greater access. This push has angered many Muslims. Mahmoud Abbas, the president of the Palestinian Authority, has warned that it could result in a holy war, and he urged his people to resist any changes to the rules. Israeli Prime Minister Benjamin Netanyahu has vehemently said he doesn’t support a shift in the status quo. But members of his party and ministers in his government have visited the area and backed some of the demands of the activists.

On Tuesday, Netanyahu and other Israeli politicians blamed the synagogue attacks on incitement by Abbas and Hamas, the Islamic group that governs Gaza and is considered a terrorist organization by Israel and the United States. “We will respond with a heavy hand to the brutal murder of Jews who came to pray and were eliminated by despicable murderers,” Netanyahu said in a statement.

A Hamas spokesman praised the attack on Facebook on Tuesday, calling it “heroic” and “a natural reaction to Zionist criminality against our people and our holy places.”

A prominent Facebook page associated with Abbas’ Fatah party celebrated the assault. But the Palestinian leader condemned the synagogue attack on Tuesday, the first time he has officially spoken out against the recent spate of violence. “The Palestinian presidency has always condemned the killing of civilians on both sides, and condemns today the killing of worshipers in a house of worship in West Jerusalem,” according to a statement posted by Wafa, the official Palestinian news agency.

“It also condemns all acts of violence from whatever source and demands an end to invasions of Al-Aqsa Mosque, to the provocations of settlers, and to the incitement of certain Israeli ministers.”

The claims sparked riots in East Jerusalem. But the police ruled Ramuni’s death a suicide, adding that an autopsy supported the conclusion. A Palestinian doctor chosen by the family to be present at the autopsy reportedly told Ma’an, a Palestinian news agency, that there were signs of a possible homicide on Ramuni’s body.

A Hamas cartoon. "Where are they?” the knife-wielding man says.

Prior to the attack on the synagogue, the group had been spreading hateful memes on social media and in forums, calling for death and revenge. One cartoon, which was published not long after the assault, showed men murdering religious Jews with an ax and a knife inside a synagogue.

Other images of the bus driver sought to connect his death to the ongoing conflict over the Temple Mount or Noble Sanctuary.

Translation: “React to killing with killing, and running over with running over, and choking with choking.”

Correction: A previous version of this article incorrectly stated that a cartoon spread by Hamas depicting murders in a synagogue had been published before Tuesday’s attack.