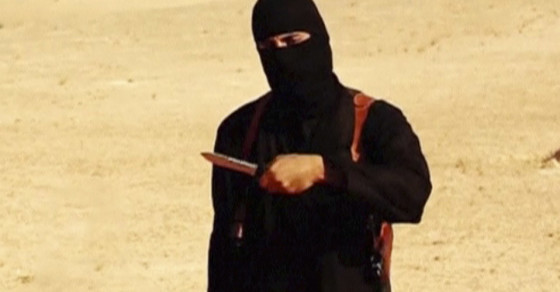 The terrorist known as “Jihadi John”, who has appeared in several ISIS beheading videos, has been identified as British citizen Mohammed Emwazi.

The Washington Post first reported the name on Thursday, which has since been confirmed by British security services. The 27-year-old Emwazi is reported to have been born in Kuwait, but grew up in West London. He graduated with a degree in computer programming from the University of Westminister before he traveled to Syria in 2012 where he joined ISIS, according to the Post.

The University confirmed that Emwazi did graduate in 2009, and issued a statement on the news:

If these allegations are true, we are shocked and sickened by the news. Our thoughts are with the victims and their families. We have students from 150 countries and their safety is of paramount concern. With other universities in London, we are working to implement the Government’s Prevent strategy to tackle extremism.

Emwazi first appeared in ISIS videos back in August, followed by a series of brutal execution videos including that of journalist James Foley, Jihadi John became a symbol of the the ruthless actions of ISIS, his British accent sparking curiosity surrounding the terrorist’s identity.

The Washington Post spoke with numerous sources close to Emwazi, who have confirmed that they believe the man in the ISIS videos is indeed him. Emwazi’s family has not commented on the release of his name. Crowds of media gathered outside of the home where Emwazi reportedly grew up in London–his family has since been relocated.

The 27-year-old Emwazi, who wears a balaclava that covers much of his face in most of the videos, has played an active role in some of the more high profile ISIS executions.

Emwazi appeared in the first beheading video released by the extremist group of the execution of James Foley in August, launching hundreds of theories about who “Jihadi John” might be. Following Foley’s execution of Foley, ISIS accidentally released another execution video depicting the death of American journalist Steven Sotloff, titled “A Second Message to America,” in which Emwazi said, “I’m back, Obama. And I’m back because of your arrogant policy toward the Islamic State.” In September, ISIS released another video of the beheading at the hands of Jihadi John of British aid worker David Haines. In October, Emwazi beheaded British taxi driver Allan Henning and paraded American hostage Peter Kassig around, claiming that he was the next victim. In November, ISIS released a video the showed the beheadings of 21 Syrian soldiers and ended with a shot of the Kassig’s severed head. This brutal display of violence was led by none other than Emwazi. Most recently, in January, Emwazi was featured in ISIS videos of the execution of Japanese journalist Kenji Goto and Haruna Yukawa.