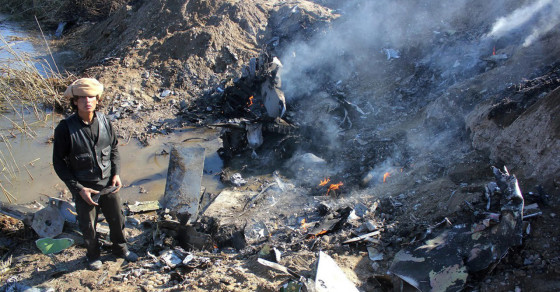 Several photos were posted to ISIS online forums Wednesday depicting militants having captured the man who was identified on Twitter as Muadh al-Kasasbeh, a fighter pilot from Jordan, in Syria. Jordanian authorities confirmed the taking of the 26-year-old, describing him as a “hostage.”

Photos show a group of elated ISIS gunmen dragging a man naked from the waist down out of a lake. The seemingly terrified individual appears to be al-Kasasbeh, whose Facebook profile depicts him as a proud, young pilot. Al-Kasasbeh’s plane is the first lost since the air strikes from the U.S-led coalition started against ISIS in Syria three months ago.

According to The Guardian, al-Kasasbeh’s father was interviewed for the Jordanian website, Saraya. He begged ISIS to return his son to safety. “May Allah plant mercy in your hearts and may you release my son,” he said.

Jordan is a “partner nation” to the U.S., but it borders on Iraq and Syria. This capture reveals Jordan’s direct military involvement in the fight against ISIS. The Jordanian government hadn’t previously publicized this, possibly because it fears retaliation from the extremist group.