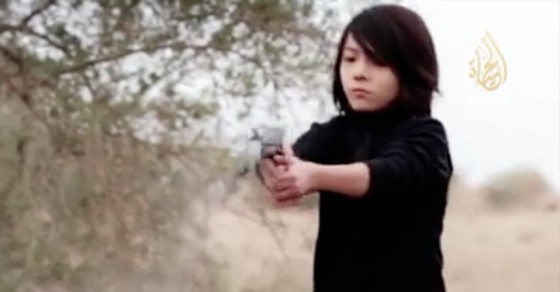 Before their execution, the FSB agents are interviewed. The first identifies himself as Mamayev Jambulat, who told his interviewers that he was sent to gather info on the Islamic State and to get closer to an ISIS member. Jambulat said that he was born in Kazakhstan, which may explain why ISIS used a Kazakh child soldier to carry out his execution. The second soldier is named as Ashimov Sergey Nikolayavich, who said that he previously worked in Russian intelligence, and was sent to locate and kill a specific ISIS leader. Nikolayavich says during the interview that he received payment on a per-piece-of-info basis from Russian Intelligence. In the video, he also says that he was once a Muslim. None of his statements have been verified at this time and could very well be coerced in the interview under duress.

Just before the six-minute mark of the video, an ISIS militant, accompanied by a child, reads a series of Quranic passages, before saying a few lines in Russian.

“Allah has gifted the Islamic State’s security agency with the apprehension of these two spies,” he says, with subtitles in Arabic and English. He continues: “By Allah’s grace, they are now in the custody of the lion cubs of the Khilafah.

At that point, the child, armed with a handgun, steps forward and shoots the two kneeling captives in the back of the head. We have edited out the most graphic parts of the video, the remainder of which is below.

Links to the video were initially uploaded to an online forum often used by the Islamic State to communicate with their followers, and circulated by affiliated ISIS social media accounts.