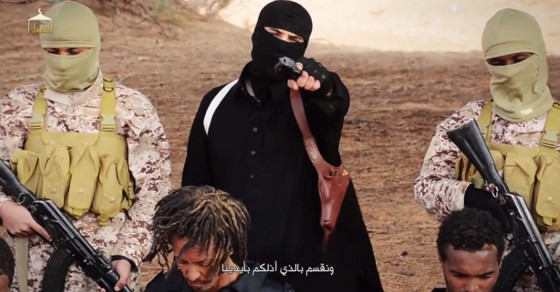 ISIS has released a near 30-minute video showing the executions of people purported to be Ethiopian Christians in two different regions in Libya. The video, in English, was released by the Islamic State’s official propaganda wing, and opens with a call for ISIS supporters to target Christians. ISIS fighters are seen destroying art inside churches, bell towers and symbols.

One set of captives was beheaded in an area the group calls Barqa Province, alongside the Mediteranean believed to be Derna, Libya. It is the same place the group is believed to have killed 21 Egyptian Christians in February, beheading them on the beach. Egypt responded with air strikes in Libya, and Derna was reported to have been one of the targets. The other group of captives were shot dead in a southern part of the country, Fazzan Province, by a group also claiming loyalty to ISIS.

Christians are told in the video they can live peacefully in the Islamic State if they accept Sharia law and agree to pay a special tax to their Islamic rulers. The video ends with a masked man standing with a group of armed men, saying the Christians were in killed “revenge for Muslim blood spilled by Christians.”