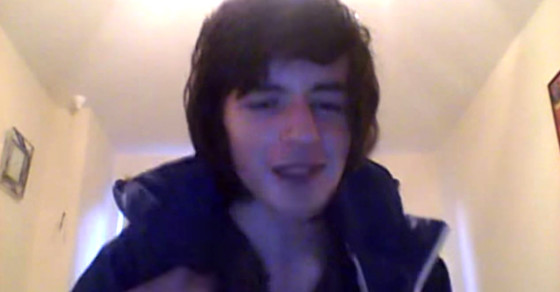 ISIS supporters on social media and jihadi forums are circulating a YouTube video showing a Western teenager singing a gibberish attempt at one of the terror group’s famous songs, “Saleel al-Sawarim.” The song is often used to accompany propaganda videos made by the Islamic State, and the teen, who posts under the username LethalAscend, is attempting a lip-sync of the Arabic air.

Although it’s pretty clear that this teen was making fun of the song, ISIS followers don’t seem to have understood the joke. Instead, they are proudly sharing the video, presenting it as great achievement that ISIS managed to “infiltrate the West with our propaganda.” They say this young “American” is singing the ISIS song enthusiastically. Some supporters even edited the video to add an ISIS logo.

The British teenager’s YouTube channel is filled with silly covers of songs, as well as videos of him mixing fizzy drinks, mocking gamers and generally being a teen. His videos typically struggle to push past 100 views and rarely draw any comments. The response to his nasheed sing-along is likely to freak him out. It has attracted nearly 24,000 views and a litany of mixed-bag comments from Arabic YouTube users, some of whom seem angry that he’s disrespecting a song he clearly doesn’t understand, others who want him to head to Syria. The Islamic State, meanwhile, is unwittingly pushing this parody viral, oblivious to the fact that it inspires giggles instead of fear.

“The Islamic State’s propaganda is infiltrating the West: A young American is enthusiastically singing ‘Saleel al-Sawarim.'”