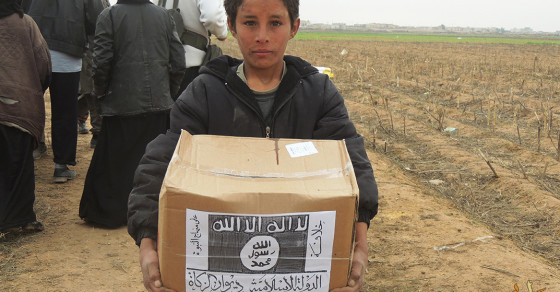 Images uploaded to ISIS propaganda channels suggest that members of the terror network near Aleppo, Syria, are stealing food and other humanitarian aid packages delivered by the United Nations, relabeling the boxes with the group’s own logo and handing them out to desperate refugees. ISIS is calling its distribution of rice, oil and other supplies to the city of al-Sfera zakat, a traditional Islamic tithing for the poor.

The United Nations’ World Food Programme had been shipping modest aid to the region—about $1 of food aid per day for each refugee—until early December of last year, when it suspended its program because of lack of funds. Last November, the U.N. Refugee Agency reported that roughly 13.6 million people (the equivalent to the population of London) had been displaced by conflicts in Syria and Iraq.