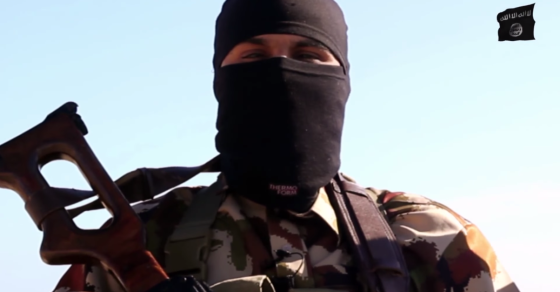 ISIS: First We Take Libya, Then We Take Tunisia
By Gilad Shiloach

ISIS: First We Take Libya, Then We Take Tunisia

The Islamic State’s “Tripoli province” released a new video calling for Tunisian supporters to help ISIS conquer Libya, as a strategic step towards conquering Tunisia. In the video, a masked ISIS gunman from Tripoli threatens to slaughter Tunisia’s leaders and avenge the imprisonment of ISIS supporters there. Local reports say that Tunisian prisons currently hold at least 150 jihadists who returned from fighting in Syria.

“The Islamic State is only a few kilometers from you [Tunisia], we are coming”, he says. “Brothers, come to Libya. Don’t be humiliated by the [Tunisian] dictators. Muslims have their own state now.” The video ends with old footage from the ISIS attack against the Iranian embassy in Tripoli, which took place on Feb. 22, 2015.

Tunisia is considered to be the largest exporter of ISIS fighters, and the group is also steadily gaining domestic influence there, with ISIS claiming responsibility for last month’s terrorist attack in Tunis. The Islamic State’s English propaganda magazine, Dabiq, dedicated their last issue to ISIS expansion across Africa, and the cover image was a picture of Tunisia’s landmark Mosque of Kairouan. This is not the first time ISIS have touted Libya as an entry point to their movement, and added to the pledge of allegiance from Boko Haram to ISIS last month, the Islamic State’s new emphasis on Libyan and Tunisian supporters bolsters theories that ISIS is setting its sights squarely on expanding into mainland Africa.

The Revealing Naiveté Of One ISIS Recruit In Libya (Daily Beast)
Syria’s Too Far? Come To Libya, Says ISIS (Vocativ)