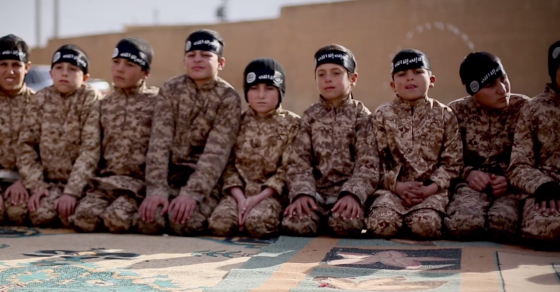 Video: Inside An ISIS Training Camp For Boys
By Sarah Kaufman

Video: Inside An ISIS Training Camp For Boys

The Islamic State released a slickly produced video on Sunday featuring what it claims is a training camp for “foreign” boys. The instructor in the video says the training camp is located in the ISIS-held Raqqa province of Syria.

On top of claiming that the boys are “foreign,” the instructor asserts that the children—around 80 in total—had already been training for about four months.

“This generation will conquer Rome and be the infrastructure of the Islamic State,” the instructor says in Arabic. The boys can be seen reciting verses of the Quran and answering religious questions. One recites a call to kill all infidels.

These children, who are purportedly the next generation of ISIS fighters, are also seen giggling, chatting and smirking, just like normal kids everywhere.