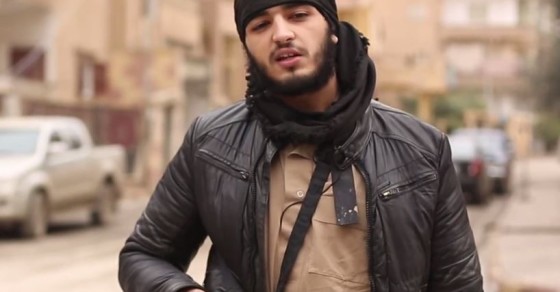 By Oren Dotan with Amit Weiss, Gilad Shiloach
Jan 14, 2015 at 7:59 AM ET
Share this annotation
[]
Get embed code for this video

The official ISIS media outlet in Raqqa, Syria, published a new propaganda video on Wednesday that shows French-speaking ISIS militants urging their brothers in Europe to slaughter infidels and kill more police. Three ISIS members speak in French dotted with Arabic expressions and threaten more attacks in Europe and the United States. The first two militants appear to have North African and West African accents, respectively, while the third speaks in an accent suggesting he is from the suburbs of Paris.

“I say to all French people who think that the Islamic State won’t arrive in Europe,” says the first militant in the video, “with God’s help, we will arrive in Europe. We will expand across all of Europe, to France, Belgium, Germany, Switzerland and also the USA. I say to all my brothers that cannot immigrate and join the Islamic caliphate, try to resist with all means, kill them, slaughter them, burn their cars and homes. I say to my brothers, if you see a police officer—kill him. Kill them all. Kill all infidels that you see in the streets.”

The video, which depicts three armed ISIS militants patrolling city streets, comes just as Al Qaeda in the Arabian Peninsula released another propaganda piece. The other video claims responsibility for last week’s Charlie Hebdo attack carried out by the Kouachi brothers. Titled “Message Regarding the Blessed Raid in Paris,” the video features AQAP leader Nasr al-Ansi. He says they “chose the target, laid the plan and financed the operation.”