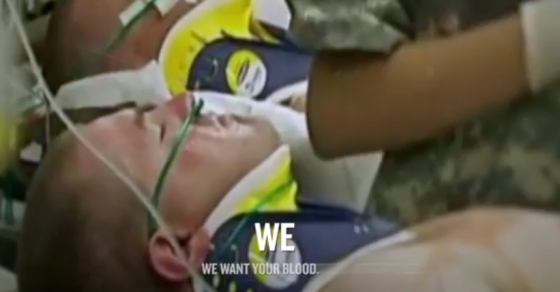 A new ISIS rap video, subtitled in English, features some of the group’s most bloody scenes of beheading and torture, while promising suicide bombers in Germany as well as New York City’s Times Square. A terrorist is shown donning a suicide belt, with subsequent imagery showing scenes from New York’s bustling Times Square, after which the bomber, dressed in western clothes, pulls the pin.

The three-minute long clip was broadcast on ISIS’s al-Hayat media network, the propaganda arm that focuses on a Western audience. Images of injured western troops being evacuated are juxtaposed with graphic scenes of beheadings and the immolation of Jordanian pilot Muath al-Kaseasbeh, shown struggling as flames engulf him.

At one point, the rapper says in German: “To the enemies of Allah, where are your troops? We can no longer wait, O Allah destroy them! Now listen you dogs of hell, this is a message and more are going to follow. This is just the beginning.” He promises German sleeper cells armed with suicide vests.

Previously unreleased footage from last year’s execution of Briton David Haines and the beheadings this February of 21 Egyptian Copts by a Libyan affiliate is also included in the video, along with the lyrics: “Mutilated soldiers are coming back to your homeland, close to desperation, eyes are being lost, bodies without legs, we want your blood, it tastes so wonderful.”

The mutilation of American soldiers is trumpeted at several points in the video.