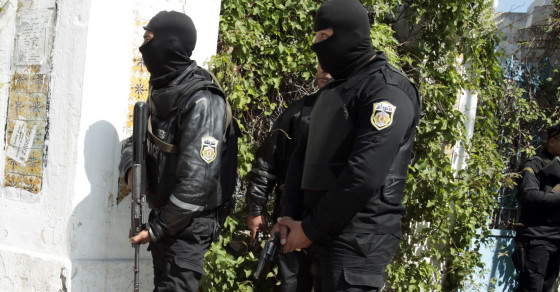 Will ISIS Take The Credit For The Tunisia Museum Attack?
By Leigh Cuen

Will ISIS Take The Credit For The Tunisia Museum Attack?

A daily news bulletin from ISIS suggests they may claim credit for Wednesday’s attack in Tunisia’s Bardo museum which left 23 people, including 18 foreign tourists, dead. It’s still not clear which group, if any, the gunmen were connected to, but the Islamic State appears poised to establish that the perpetrators were operatives loyal to them.

Thursday’s official “daily news bulletin” from ISIS featured information about the attack in Tunis and praised the perpetrators. The news bulletin usually focuses exclusively on attacks and battle plans by the Islamic State, not any other terrorist groups. Featuring the Tunis attack in their bulletin implies that it was, at least in part, orchestrated by ISIS.  The bulletin didn’t specify that the gunmen worked for ISIS, nor did it follow the typical protocol for published information about ISIS martyrs. The listing didn’t include the attackers’ names or where they came from, and the listing was not accompanied by Quranic verses or any justification for the action against Tunisia. Under the “world section” of the bulletin, it simply says:

“Two Mujaheddin attacked crusaders in Bardo Museum in Tunis. Around 20 of the Cross-worshipers died according to reports. This is the biggest operation against Zionist-Crusaders targets in Tunisia since 2002, when Jewish synagogue in Djerba was blown up and 21 Jews were killed. We ask God to take our brothers to heaven.”

It’s possible that ISIS wasn’t connected to the attackers at all, and may be trying to take credit for the attack after the fact. On the other hand, evidence of their connections with the attack may surface later, as happened with the terrorist attack in Paris in January. The day after the Charlie Hebdo attack, their daily bulletin led with news of the Paris attacks, which they later claimed in full.

One Of Tunisia’s Most Wanted Killed Fighting In Libya (Vocativ)