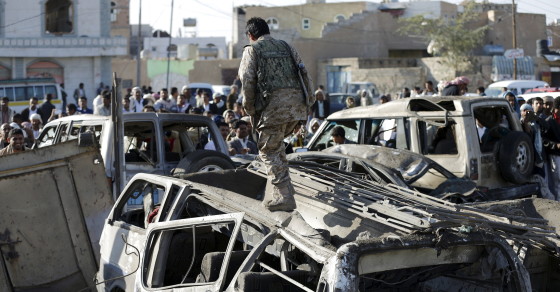 Supporters of ISIS have condemned the Saudi-led airstrikes on rebel Houthi fighters in Yemen, claiming in online forums and Twitter that the actions were a veiled attempt by the United States to interfere in the Middle East and propagate an American agenda.

“We will not allow America to interfere in the Arab world by using an Arab proxy. Arabs will only succeed when they leave the control of the Americans and move outside their circle of influence and control,” a well known radical user, whose pen name is translated as “What hour?” wrote.

The same user continued, arguing that the U.S. shouldn’t be involved in Middle Eastern affairs at all, that the ancient schism between Sunnis and Shiites was a conflict that ought to be fought without western influence.

“The ongoing war in the area is mostly an internal one, one that is fought between people who follow the rules and justice of Allah in its most basic form, and between the traitorous and corrupted ruler,” the user wrote. “The revenge is not only against the evil Shiites, and not only against the tyrants, but against those who provide them with the weapons and the missiles they use to draw out blood.”

But the shift of attention from ISIS onto Yemen, where ISIS has struggled to gain territory while continuing to launch deadly attacks there, may be a greater factor. ISIS benefits from the world’s spotlight, it translates publicity into efforts to attract recruits from around the world. The sudden concentration of the media on Yemen and regional players appears to have concerned ISIS supporters about the group’s impact online.