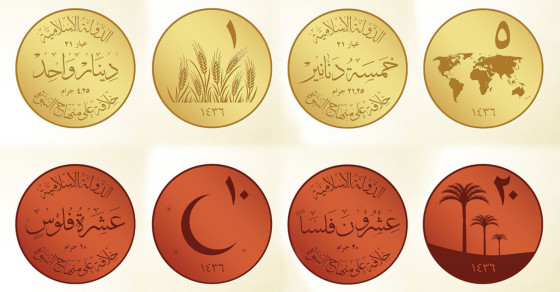 Cracking the Code Behind ISIS’ New Currency
By Gabriel Bell 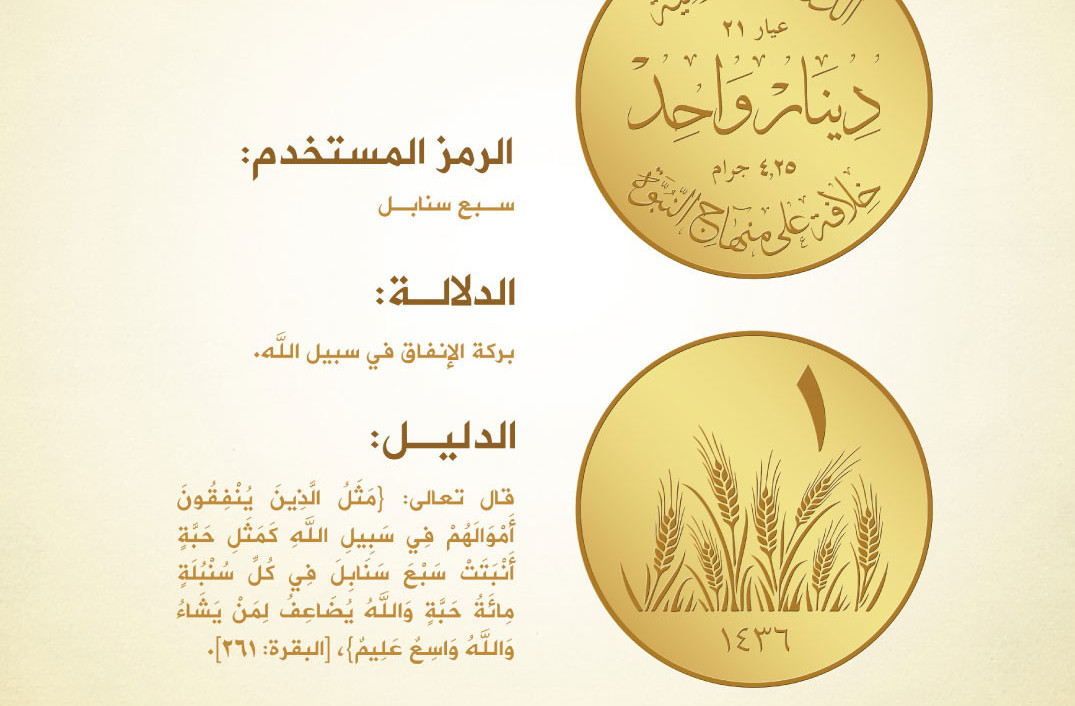 Early Wednesday, much to the amusement and curiosity of the locals, members of ISIS unveiled what they claim is a new currency in the Iraqi town of Al Qaim. While it remains unclear exactly how big the coins will be, how many the militant group will minting or when the world will see physical, tradable versions of them, a translation of ISIS documents reveals some interesting things about the effort.

Just like the U.S. currency, the ISIS coins are covered with powerful symbols containing esoteric meaning. While our coins may feature presidents on the heads and monuments on the tail to represent American history and values, ISIS’ dinars and foloos can to look elsewhere for icons—after all, depicting the face of the prophet would be sin. They use trees to symbolize unwavering faith, and landmarks—the al-Aqsa Mosque, for example—to represent the journey of the faithful Muslim. Such iconography is actually fairly common in the currency of Islamic states. From a purely visual standpoint, the coins themselves fit into the universe of international denominations quite seamlessly.

1 Dinar (4.25 gram, 21 carats gold)
Symbol: Seven wheat stalks
Significance: The blessing of spending the money in the way of Allah
Religious Proof: “The example of those who spend their wealth in the way of Allah is like a seed [of grain] which grows seven spikes; in each spike is a hundred grains. And Allah multiplies [His reward] for whom He wills. And Allah is all-Encompassing and Knowing”

The group claims the currency exists to prevent interest or inflation. Both are aspects of usury, a traditional sin and, to ISIS, an opportunity for Western and Jewish exploitation. The ISIS coins will derive their value from the materials that each is made from (gold, silver or copper).

If issued, the coin would be legal tender over a 155,000-square-mile area covering both Iraq and Syria, with a population of anywhere from 10 to 12 million. Exactly where ISIS will collect the precious metals for the coins and mint them is unclear— though through trade in Iraqi antiquities, oil and extortion, the group has a mounting financial empire. Late last month, experts estimated that ISIS held over $2 billion in assets, an amount that would have grown by up to $5 million a day since. The cost of issuing the metal coins across that large territory, not to mention the expense of managing and maintaining a currency, would likely be considerable.

The largest silver piece, the dirham, is worth approximately $1. Currently, a loaf of bread in Mosul, Iraq, costs $2, though in other areas of the country that price could drop.

“Based on the decision from the leader of the Islamic State, Caliph Ibrahim, to mint currency for the Islamic State, separated from the tyrannical monetary system that was imposed on the Muslims and was a reason for their enslavement and impoverishment, and the wasting the fortunes of the Islamic nation, making it easy prey in the hands of the Jews and Crusaders, the Treasury Department studied the issue and presented a comprehensive project to mint a currency based on the inherent value of the metals gold and silver.

“All the project’s aspects were discussed by all the parties concerned, and recommendation were submitted to the Shura Council of the Islamic State which approved it.

“The currency will be minted from gold, silver and copper, and further instruction will be provided by the Treasury Department. We ask Allah to strengthen the [Islamic] nation with this step and releasing it from the Satanic and ‘interest-based’ international economic system. [Charging of any interest is forbidden in Islam.]”