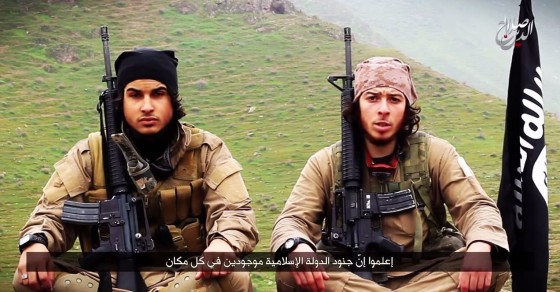 ISIS Calls For More Terror Attacks In France And Belgium

The Islamic State released a video on Saturday threatening new attacks in France and Belgium in the wake of shootings in Copenhagen, Denmark, that killed two people and wounded at least five police officers.

The official ISIS media wing in Salah al-Din, Iraq, released the new video a month after the Charlie Hebdo attack in Paris. It includes footage from a previous video featuring Amedy Coulibaly, the ISIS-inspired terrorist who attacked a kosher supermarket in Paris. After showing Coulibaly, two French-speaking ISIS fighters appear on screen and urge Muslims in Europe to attack “non-believers.”

“I demand all my brothers who live in France among the Kufar [non-believers], if you are unable to immigrate for Allah, work within,” one of the militants says in French. “Defend God’s messenger [the prophet]. Kill them. Kill them with any weapon you can get. Spit on them, burn their cars, burn police centers, do no show them any mercy.”

The second fighter says, “A message to France, Belgium and every person who speaks French: You have already seen us in action. But this is only the beginning. Now the killing will come, now the battle has begun. You Muslims who live among them, when will you immigrate for Allah and protect your religion?”

A few minutes later, the fighters show a knife and a gun, vowing to behead and kill their enemies. They also threaten to use car bombs in Paris and Brussels.