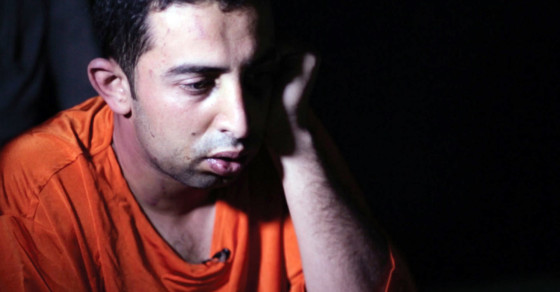 ISIS released a new propaganda video on Tuesday which it claims shows the group burning Jordanian pilot Muath al-Kaseasbeh alive. Al-Kaseasbeh was placed in a cage on open ground, draped in the now-traditional orange robes, doused in flammable liquid and set alight.

ISIS had offered al-Kaseasbeh as a bargaining chip in exchange for a female suicide bomber held in Jordan. His release was purportedly being negotiated simultaneously to bargaining for the lives of two Japanese hostages, both of whom were subsequently beheaded. Reports on Monday suggested that ISIS was running out of hostages and had misjudged the Jordan negotiations.

The highly stylized video used modern motion graphics to enumerate the level of participation of many Arab states involved in anti-ISIS efforts. Al-Kaseasbeh is shown, with a black bruise under his left eye, at the scene of an apparent Western coalition air raid. Watched over by as many as nine uniformed ISIS militants, al-Kaseasbeh is paraded at the rubble-strewn site, while the video flashes back to scenes of destruction from the time of the raid itself. Al-Kaseasbeh is eventually shown standing in the cage, with a cross of flammable material under his feet. A masked executioner lights a long fuse from outside the cage, flame snakes toward al-Kaseasbeh, and he is burned alive. The duration of his suffering is captured on the video.

At the end of the video, English text offers a ransom for other downed pilots:

The Islamic State announces a reward of 100 Gold Dinars to whoever kills a crusader pilot. The diwan for state security has released a list containing the names of Jordanian pilots participating in the campaign. So good tidings to whoever supports his religion and achieves a kill that will liberate him from hellfire.

The film then lists several high-profile Jordanian air force figures, with “wanted” beside their names. Jordan state television has confirmed al-Kaseasbeh’s death and said that he was killed on Jan. 3.