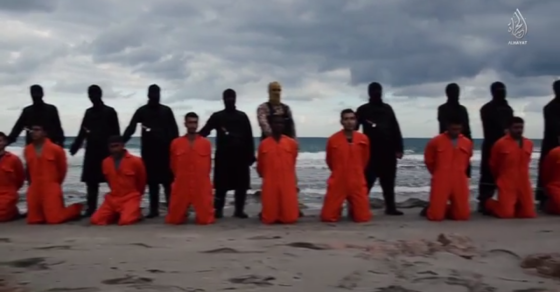 The Islamic State’s al-Hayat media center has released a five-minute propaganda video showing the mass beheading of 21 Coptic Christians from Libya, a video which follows reports from earlier this week suggesting the atrocity had been carried out. A spokesman in the video indicates that the terror group is now turning its gaze toward Italy.

Titled “A Message Signed With Blood to the Nation of the Cross,” the video depicts the 21 prisoners in the now-familiar orange jumpsuits being led down a beach by 21 ISIS fighters in their equally familiar black outfits. As they kneel in the sand, subtitles indicate that the men are “the people of the cross, the followers of the hostile Egyptian church.”

A still from the most recent ISIS propaganda video.

An English-speaking member of the team in a camoflage uniform tells the camera: “Recently you have seen us on the hills of [Syria]…and today we are on the land of Islam, Libya.”

The spokesmen makes reference to America’s killing of Osama bin Laden, saying: “And the sea you have hidden Sheikh Osama bin Laden’s body in, we swear to Allah we will mix it with your blood.”

After declaring unity with other international branches of the extended ISIS network, the executions begin. Unlike more recent videos, the camera does not shy away from the actual beheadings, showing all 21 in grisly detail. The victims are forced onto their stomachs, with much of the execution shown in a sped-up timelapse.

At the end of the video, the camo-clad executioner, knife in bloodied hand, pledges that ISIS will conquer Rome. It’s the second reference to the city which was once center of the Holy Roman Empire—at one point he says that they are situated in the land “south of Rome.” Italy has recently expelled a number of Islamic militants, and is, according to RFI, planning to send 5,000 troops to Libya to combat extremism there.

The video captures the same scene as photos which surfaced along with an announcement of the executions in the Islamic State’s Dabiq magazine earlier this week. Yesterday, the Libyan parliament confirmed those claims. All this comes as multiple reports from intelligence agencies and ISIS itself suggest that the terror network is rapidly expanding into Libya and other regions including Afghanistan, Algeria and Egypt.