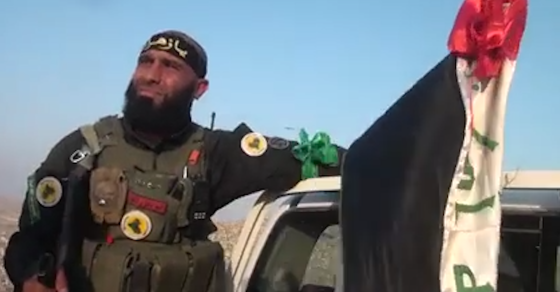 Meet The Iraqi “Angel of Death” Who Fights ISIS 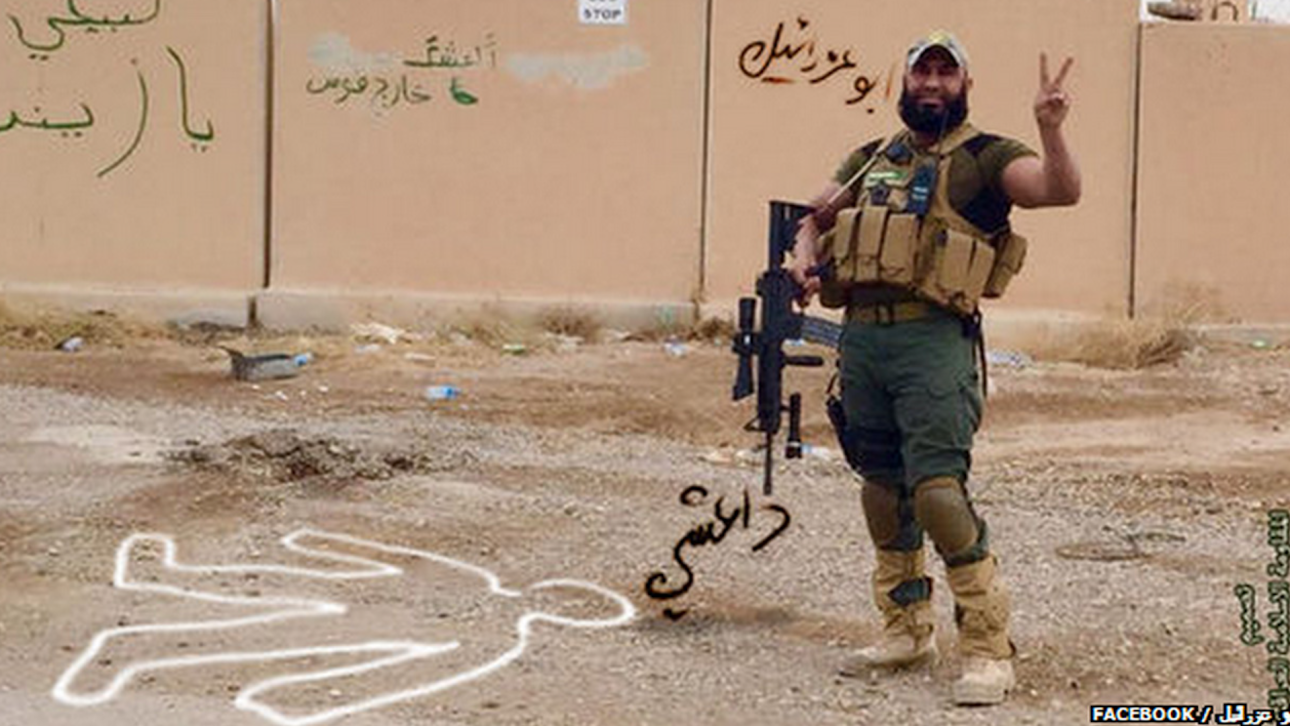 He’s the symbol of Iraqi Shiite resistance against ISIS, the muscly hero promising to pulverize his enemies, while holding all “oppressed people,” including Christians, close. He goes by the moniker of Abu Azrael, the “angel of death,” alternately wields an axe or a machete, and poses in churches holding bibles.

His real name is Ayub Faleh al-Rubaie, he said in an interview. And while his claim to have taught at a university has never been verified, he does acknowledge his history as a militia member once loyal to the radical cleric Muqatada al-Sadr, a foot soldier in his Mahdi Army. Sadr’s militias were responsible for large-scale retaliatory sectarian attacks in Baghdad in 2006-2007, and vehemently anti-American. Since the U.S. troops withdrew Sadr has largely assumed a political role as kingmaker in the Iraqi government.

And in parts of Iraq, Abu Azrael, now seems ubiquitous. His face is on t-shirts, which also feature his catchphrase “illa tahin,” which translates to “into flour,” meaning, he will pulverize his enemies, turn the bodies of ISIS members into powder. There are music videos and cartoons celebrating him, and regular television interviews with giddy anchors and smiling politicians.

Despite his having told Vocativ that he welcomed all sects and represented all Iraqis, he and his fighters have shown little regard for Sunnis who’d abandoned their homes in territory previously held by ISIS.

“If we weren’t good-hearted people, we would have burned your houses down to the ground,” he said in a video released earlier this year, in which he’s riding a bicycle through what had become a ghost town. He said that only houses with the ISIS flag displayed were set on fire. And he and his fighters from the Imam Ali brigade have posted images online of themselves abusing the corpses of dead ISIS fighters.

Abu Azrael’s popularity is largely considered a measure of how eagerly people in Baghdad have pinned their hopes on a defense against ISIS. When the group captured Mosul to great fanfare last year and declared their caliphate, ISIS fighters warned their march on Baghdad was not far away. Since then ISIS has suffered setbacks in the north, but it has made inroads into the western city of Ramadi, only 70 miles from the outskirts of the capital. Baghdad residents are dealing with the deluge of around 100,000 Iraqis escaping the violence in Ramadi, adding to already simmering tensions in the city.

To some extent, of course, his popularity is a function of that hope. But the cult of personality surrounding Abu Azrael is both concocted and deliberately cultivated, says Philip Smyth, a researcher at the University of Maryland, who has been studying Shiite militias for years.

Smyth believes Iran has deliberately bolstered Abu Azrael’s profile, and that the dozens of Facebook pages created to praise Abu Azrael and the hundreds of thousands of “likes” they have amassed, were manufactured.

“This is a guy I knew something would pop out in western media from the way they were pushing him,” Smyth told Vocativ. “He’s the perfect symbol of a militia leader. He has a family, he has a very cool nom de guerre, it clicks all the buttons.”

Abu Azrael’s rise to fame has been in step with other Shiite militia leaders promoted by Iran, says Smyth. One named “Abu Hillel” was fighting in Syria, he says. “There are shots of him riding a bicycle, shots of him hanging out with kids, smiling, leading an ambush against ISIS, there are lots of parallels with how lots of militia leaders are promoted.”

Abu Hillel was killed in Syria earlier this year. Another named Abu Hajjar, known for wearing a fedora in combat, was killed in Syria two years ago. The Shiite militias, under the umbrella of the Popular Mobilization Units (PMUs) are said to be led by Abu Mahdi al-Mohandis, who once led the Iranian-backed Badr Corps, the military wing of the Supreme Council for the Islamic Revolution in Iraq. Mohandis, whose real name is Jamal Jaafar Muhammad Ali, is blamed by U.S. officials for the bombing of the U.S. Embassy in Kuwait in 1983.

Mohandis is said to be the right-hand man of Qassem Soleimani, the head of Iran’s Quds Force. He is regularly photographed with Abu Azrael. There’s even a photo of Mohandis kissing Abu Azrael’s bandaged hand.

“It’s an attempt to put forward a hero for the PMUs, to structure the narrative about militia fighters before others do, given the reputation of previous figures, such as Abu Deraa,” said Sajad Jiyad, a research fellow at the Iraqi Institute for Economic Reform, in Baghdad.

The Abu Deraa he’s referring to was a different kind of hero. A Shiite paramilitary leader, he was a symbol of the sectarian war that raged through Baghdad in 2006-2007, and behind much of the ethnic cleansing that cleared Sunnis from the capital at the time. His name is both feared and admired across the capital. He is no longer fighting, but rather, waiting at home in Sadr City, for the word from Sadr himself, to join the fight against ISIS.

While Abu Deraa sits at home, Abu Azrael is basking in the attention, even as he recognizes the prize his death would be for ISIS.

“I’m not worried,” he told Vocativ. “I welcome death if destiny brings it.”