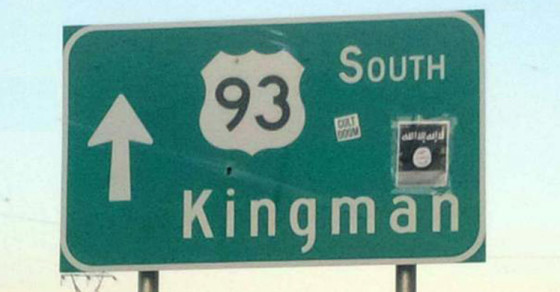 This Man Has Been Plastering Houston With ISIS Stickers
By M.L. Nestel

This Man Has Been Plastering Houston With ISIS Stickers 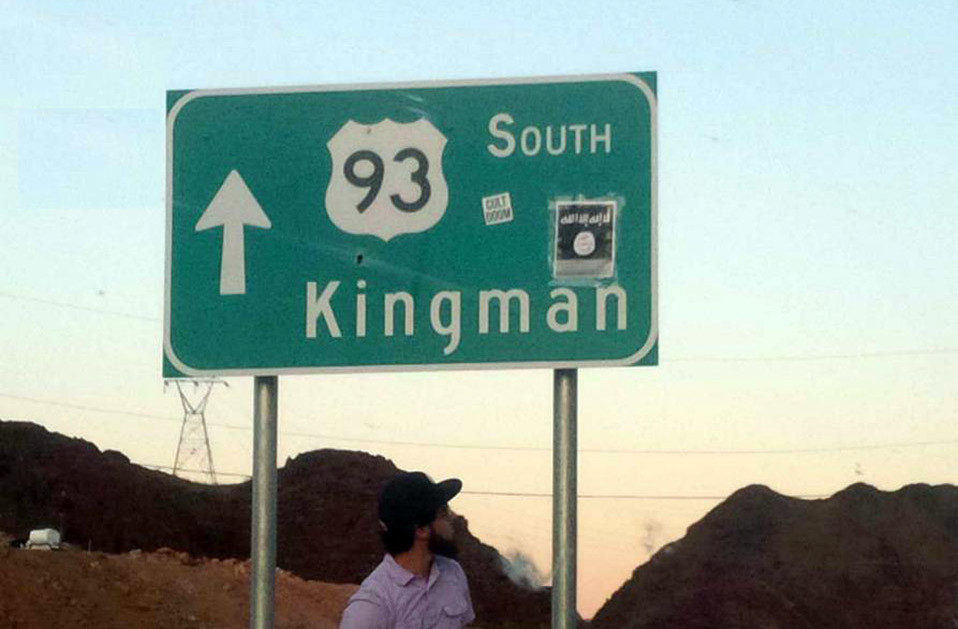 At a time when the FBI is on high alert for signs of ISIS allegiance in the U.S., a bearded man in Texas has been proclaiming his support for the militant Islamic group in some fairly conspicuous ways. Adam Abdulrahman has been wearing ISIS garb around town, staging pictures in public places of American flags next to ISIS flags, and posting his critiques of American culture on YouTube.

Now the man who’s dubbed himself “Houston Baghdadi” on Twitter has a new act. Throughout October, as the U.S. has stepped up a bombing campaign to wipe out the militant group in Syria and Iraq, Abdulrahman has been papering Houston with white-and-black ISIS stickers. He has plastered memorials, city vehicles, grocery store checkout machines and many other things, and shared his conquests on Twitter and YouTube.

Baquiah Wa Tattamadded (Islamic State Will Remain and is ever expanding) promise of Allah (God). https://t.co/yB2nGfvQ12

With ISIS beheading Western journalist hostages and threatening in its forums to attack specific targets in the U.S., Abdulrahman, with his overt displays of ISIS fervor, is testing the limits both of the First Amendment and of his fellow Texans’ tolerance.

The FBI tells us that it knows all about Abdulrahman. “We were made aware of the social media reports of that individual,” a spokeswoman says.

We reached out to the Abdulrahman, but he hasn’t responded.

We first came across Abdulrahman a couple of months ago as we began tracking the social media activities of ISIS sympathizers in America. He had landed on our radar because he was a Twitter follower of a sheikh named Ahmad Musa Jibril who had helped funnel hundreds of foreign fighters into the war in Syria to oust that country’s president.

Some of Abdulrahman’s posts seem innocuous enough. This past summer, the 28-year-old posted pictures of himself mugging for the camera with cops. All smiles.

Adam Abdulrahman stands next to a Houston policeman, calls him a hero and asks Allah to bless him.

But more recently, Abdulrahman, who claims the title of “Islamic caliphate state fact reporter,” has gotten more provocative, and at times confrontational. He posted pictures of himself in September being booted from a Houston mosque where he had tried to chant and pray, despite requests for him to leave.

“Allah says I’m welcome, and this is the house of Allah,” he tells a cop. After a standoff, Abdulrahman was ushered out of the mosque by uniformed cops—but not before he belted out the name of ISIS leader Abu Bakr al-Baghdadi.

The police officer responds that he doesn’t understand what that means.

Abdulrahman tried to return to the mosque that same night and captured video of an angry security guard warning him that he was criminally trespassing and telling him, “You are done here.”

Also in September, when he tried to buy food at a downtown Houston diner, a person in line behind him snapped a photo of the ISIS insignia printed on his right shoulder and called the cops on him.

When the police arrived, they put Abdulrahman in a cop cruiser and later released him.

Adam Abdulrahman sits handcuffed in a Houston police car. He was not arrested.

Abdulrahman, who grew up in the Midwest and says he has ancestors from Palestine, describes himself as a married college student majoring in engineering management at a Texas University. Sometimes he rails against the excesses of America, including a video he narrated in a grocery store. While he guides a shopping cart through the liquor aisle, Abdulrahman chats another customer and then pans over the copious amount of beer and spirits. “I wish I could break every bottle,” he says.

Another video on YouTube and Twitter shows Abdulrahman behind the wheel of a car, wearing an ISIS baseball hat and sunglasses, reciting prayers in Arabic.

Sometimes he talks about jihad. In one video, Abdulrahman performs verses from a chapter of the Quran while standing over a patient at West Houston Medical Center. As he chants in Arabic, he paraphrases in English to the patient—whose face doesn’t appear in the camera frame.

“We’re an ethical people,” he declares during the 14-minute video. “But you mess with us, you try to hurt us or you try to lie to our Prophet Muhammad, then it’s arms baby!”