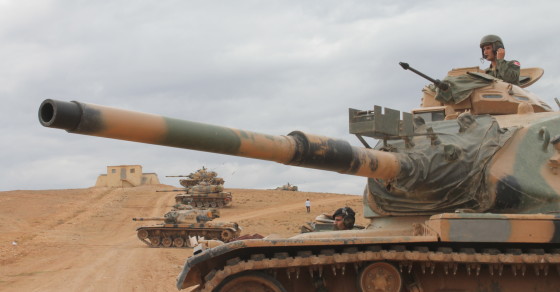 On the Front Lines in the War Against ISIS 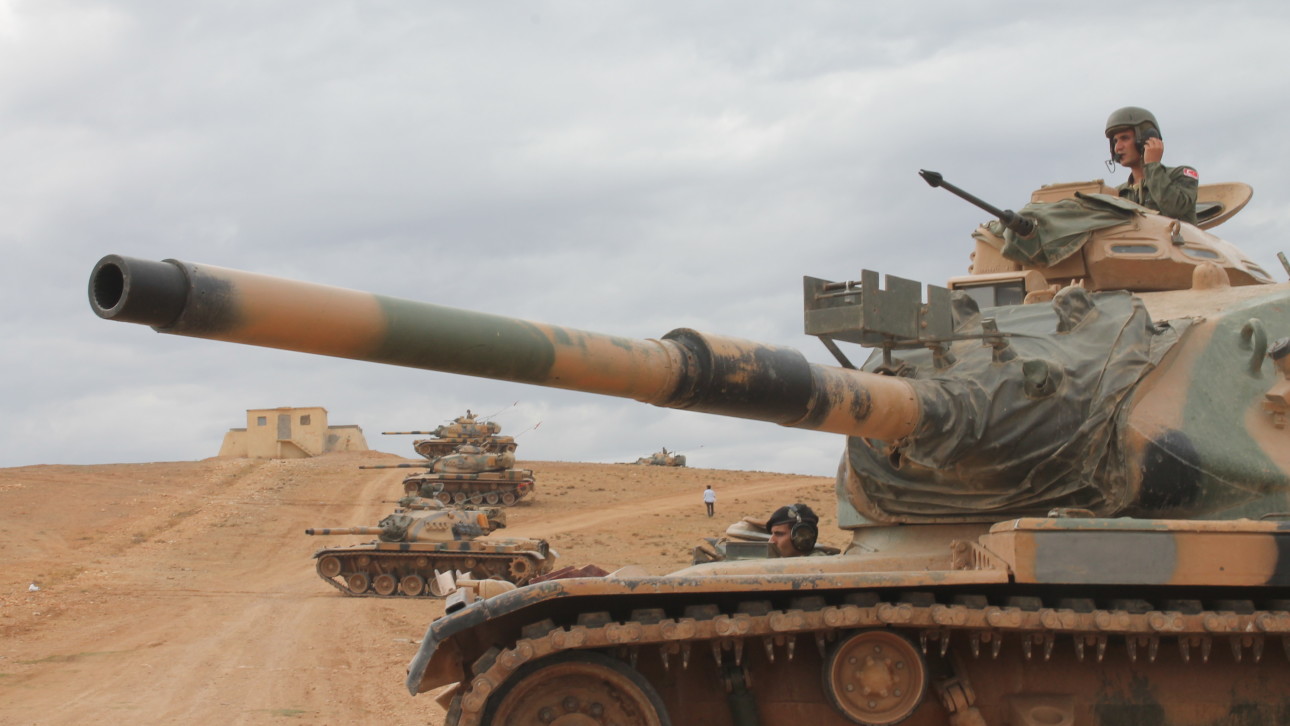 The hole in the fence is big enough to walk through. And from where I  stand on the edge of the Turkish border, I can see directly into  Syria—the latest battleground between Kurdish militias and the  jihadi group called the Islamic State.

I’d come here last week with a convoy of Turkish Kurds from  Istanbul. Some were aid workers, others were members of Kurdish political parties. All were joining groups of  Syrian Kurds who had fled with their families into Turkey, then  returned across the border. Now that their families were  safe, the Syrian Kurds wanted to fight the jihadi group,  which is commonly known as ISIS.   And their Turkish cousins wanted to help them, or at least show their support.

The battle has intensified in recent days, as ISIS has ratcheted up  attacks on the outskirts of Kobane, Syria. But as the jihadi group  advanced toward the town, all seemed quiet—at least at first.

A variety of Kurdish political  parties and human rights groups organized the trip. It’s a 21-hour trek south over  mountainous terrain. But the mood was festive as we bumped over the road. People sang   Kurdish songs and danced in the cramped aisles.

Behind the happy veneer, however, people were clearly afraid of what  could happen to their cousins on the other side. “Kobane is suffering,”  a blond college student named Bahar told me as we made our way toward the border.

Like hundreds of others I met en route to Syria, she asked that I use only her first name. “I decided to go because I don’t want it to be a  second Sinjar,” she added, referring to the region in Iraq where ISIS had trapped tens  of thousands of Yazidis, a religious minority group, before U.S. airstrikes helped save them.

The convoy passes through Turkey toward the Syrian border.

Back on the border, as we stare through the hole in the fence, everyone is eager to cross. The organizers make several frantic phone calls, and within minutes, dozens of other buses and cars arrive. Quickly, hundreds of us cross into Syria. The Turkish military, which is supposed to be guarding the border, is nowhere in sight.

Once inside Syria, it’s about a 700-foot walk to Kobane. But the terrain is treacherous. Land mines supposedly lurk between the white stones, and we proceed extremely cautiously. No one speaks, and the short walk seems to last forever. The sky is silent, and the only thing I can hear is the sound of my heart beating.

As I enter Kobane, I’m surprised to see that the streets are lively. Women and children hug us and celebrate our arrival. Fighters linked to the Kurdistan Workers Party, a group that’s long fought a bloody war against Turkey, greet us warmly.

One fighter approaches me and says something in Kurdish. I reply in Turkish and he switches to my language. “Do you want to join our fight?” he says, smiling.

I don’t, but I feel for him; he has desperation written in the lines of his face. I gracefully decline and tell him that I’m a reporter, then keep walking east toward the front lines.

Along the way, I pass abandoned houses where men with Kalashnikovs stand guard on rooftops. I stop at one of these houses, climb the steps and speak to the fighters, some of whom are from Turkey. They’re in an excellent mood, happy even. From the looks of it, they seem unafraid to die.

The smoke in the distance shows where ISIS is fighting against the Kurds near Kobane.

One of the fighters introduces himself as Hasan. He’s in his mid-20s and came here from southern Turkey to support his Kurdish cousins. Like the young student I met on the bus, he doesn’t want to give his last name.

Hasan has lost faith in Turkey. He thinks the government is supporting ISIS, even though it recently joined an American-led coalition against the jihadis. “We don’t need Turkey’s help,” he says. “This is our country as well. We can protect ourselves.”

He seems brave, but bravado alone won’t save the Kurds.

Before long, I hear gunfire in the distance. Minute by minute, it creeps closer, so some of the fighters bring me downstairs. It’s safer here.

Fighting in the center of Kobane, Syria.

As the fighting intensifies, I decide to walk back to the center of town. There I meet Kurdish women armed with machine guns, chatting with friends. Water is scarce in town, and what they have looks like mud. But when they offer me a drink, I can’t refuse. I’m impressed by their hospitality. For all the anger against the Turkish government, the people here are hospitable. They have an interest in treating me well, but their kindness seems genuine.

Hours later, as the battle continues, I can hear the Kurdish fighters in the distance, whooping with elation, shouting their war cries into the sunset. The fighting is heating up, and I decide to return to Turkey.

I retrace my steps over the white stones, once again terrified of stepping on a land mine. Minutes later, I pass through the field safely, breathing a sigh of relief. Only this time, when I return to the hole in the fence, a battalion of Turkish soldiers greets me with guns.

A senior officer orders me to stop and asks where I’m going. I tell him I’m a journalist returning to Istanbul. “You should have not crossed,” he shouts. “If you move, I will shoot you.”

Turkish soldiers near the Syrian border.

Paralyzed, I start thinking of my family, of what they’ll do if I’m killed. Behind me, a crowd of Turkish Kurds gathers. They are also ready to return. The senior officer tells us that no one is permitted to cross, but the crowd grows restless and begins to chant: “Long live the Kurdish resistance.”

As the chant grows louder, I hear the hiss of tear gas canisters and begin to choke. My vision blurs, and we all start running back into the field with the land mines—anything to avoid the tear gas.

The soldiers make us wait for hours on the other side of the field, then order us to walk 18 miles to a legal border crossing. Without food or water, we make the trek, braving a sandstorm along the way.

The Turkish army mans an illegal crossing on the Syrian border.

At midnight, we arrive at the crossing. The soldiers let me pass, but they seize my notebook and my recorder. I don’t get them back. But as ISIS approaches Kobane, I know I’m one of the lucky ones.

Translated from Turkish by Elcin Poyrazlar