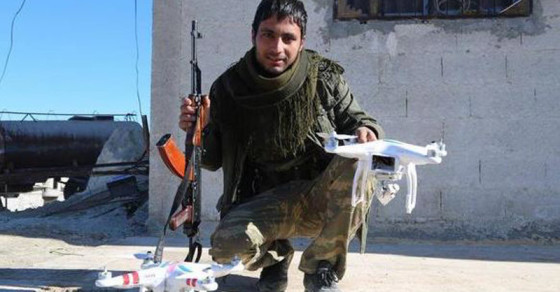 In the past year, several ISIS media outlets and forums have shown the terror organization using civilian drones to scout and plan for battles on the ground in Syria and Iraq. And as it turns out, the group’s favorite model is also one of the most popular drones in the U.S.—the DJI Phantom.

In the Syrian city of Kobane last month, YPG fighters (the Syrian Kurds militia) allegedly shot down a few of these drones supposedly under ISIS’ control. Now an ISIS supporter has published a new how-to guide on a popular forum for the group. The post provides technical instructions on how to operate DJI Phantoms for military use without risking the drone or the fighter operating them remotely.

“Drone allegedly captured by the Syrian army near Aleppo, Syria.”

The DJI Phantom drone is very popular worldwide. It is available for purchase online in many e-commerce sites, such as AliExpress.com, where it costs less than $800.

“Urgent message to whoever is in charge of ISIS drones in Kobane.”